The Efroymson Center for Creative Writing, a place where writers “will find a home for those words and thoughts they can’t say anywhere else,” officially opened Dec. 2 with a ceremony that brought together faculty, students, administrators, donors and other guests to celebrate the newest addition to Butler’s campus. 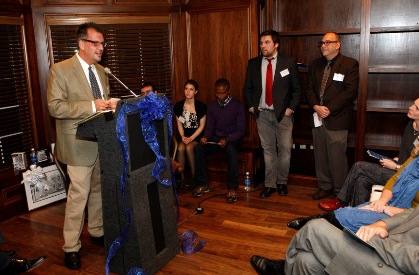 “When Butler initiated its MFA in Creative Writing in 2008, we did so because Indianapolis was the largest American city that did not have such a program,” said English Professor Andy Levy, director of the MFA in Creative Writing program. “And when we asked our students what they wanted, here’s what they said more than anything: We want a home, a place to call our own. We will call this building a center, but make no mistake: It’s a home.”

Levy said the center will be a place where students, faculty, visiting writers and the community “will feel welcome, encouraged, inspired, to write, and to join with others in writing, in reading, in publishing, in service. They will find a home for those words and thoughts they can’t say anywhere else.”

The house at 530 W. Hampton Dr. was purchased and refurbished with a $1 million gift from The Efroymson Family Fund, a fund of Central Indiana Community Foundation, and Jeremy Efroymson MBA ‘02. Efroymson; his mother, Lori Efroymson-Aguilera; and his sister Elissa attended the ceremony.

“I’m very happy for the way this has all turned out,” Jeremy Efroymson (pictured above) said. “It’s a beautiful building, and I think it will be an asset to Butler University.”

Over the past several months, the house, which is sandwiched between the Butler University president’s home and Butler University Police Department headquarters, has been largely gutted and reconfigured to accommodate multiple uses. The center will be the site for writing workshops and discussions. It will provide office space for faculty and student creative-writing groups, living space for visiting writers, visiting students and alumni, community meeting space and more.

Butler President Jim Danko said the center will serve as an “important jewel” on the Butler campus.

“It really does represent the commitment we have here at Butler University to our writing programs and to the creative expression that we have on campus,” he said.

Danko thanked the Efroymsons for including an endowed maintenance fund for the center in their gift, as well as scholarships for MFA candidates.

Doug Manuel, Andrew Soliday, Jenna Caschera and Zach Roth, the first four recipients of the Efroymson Scholarships in Creative Writing, each spoke briefly to thank the Efroymsons for their gift.

Levy said the scholarships, designed to attract compelling out-of-state students, “have told the national creative writing community that we have the resources to offer the support young, talented writers need. These are wonderful students, and we are delighted that they rolled the dice and moved to Indy and joined our community here.”

The house has a long Butler-related history. It was built by longtime Butler benefactors Edward and Dorothy Gallahue. Between 1965 and 1979, the house was owned by Butler and used as the president’s house. In 1979, the University sold it to the Steiners – Albert M.S. ‘64, chair of the Department of Classical Studies for 32 years and now emeritus professor of classical studies, and Mary Ann ‘88, who still works in the University’s Office of Registration and Records. The Steiners were both on hand for the dedication ceremony.

Hilene Flanzbaum, chair of the English Department, said she was “deeply grateful” for the Efroymsons’ gift and everything they’ve done for Butler.

“I think what’s clear is that we have a winning combination here,” she said, “and a terrifically bright future.”