Master of Music ’13 candidate Kelly Swensson has been named one of 10 semi-finalists in the Meg Quigley Vivaldi Competition, a major international competition for female bassoon students from North, South or Central America who are under age 24. 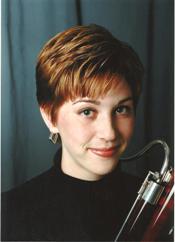 Her next step in the competition will be in the semi-final round, which begins Jan. 6 at the University of the Pacific in Stockton, Calif. Five of the musicians advance to the finals two days later, where they’ll compete for more than $20,000 in prize money.

To get to this point, Swensson, 23, was required to learn the competition repertoire and make an audition tape. The semi-finalists were chosen from those recordings.

In California, she will be required to play a Vivaldi concerto from memory; Sortilège, a composition written specifically for the competition by Margi Griebling-Haigh; and a third selection of her choosing. More information about the competition is available at http://mqvc.org/competition.html

“I am honored to be chosen as a semi-finalist, and proud to be representing Butler in an international event,” she said. “Spending a few days in California in January sounds pretty great too!”

Swensson grew up on the Eastside of Indianapolis and started playing bassoon in sixth grade “because it looked like a fun instrument and I wanted to play something different than anyone else.”

Butler Professor of Music Douglas Spaniol taught Swensson in private lessons when she was in middle school and high school, “and he was such an outstanding teacher that now I’ve returned to do my graduate studies with him,” she said.

“She always plays musically and sounds beautiful despite the technical challenges that the instrument may present,” he said. “She has a lot of natural talent and has worked hard over many years to develop that talent. She has already achieved a great deal as a bassoonist, and I expect her to have a very successful professional career.”

With Swensson’s entry in the competition, Butler becomes the only school in the United States to have a student place in the two most recent international bassoon competitions. Stephen Duncan, a senior bassoon performance major, was named the alternate in the International Double Reed Society’s Young Artist Competition, considered the world’s most important contest for bassoonists ages 22 and younger.

Swensson said after completing the competition and her studies, her short-term goal is to continue living in Indianapolis with her husband, Jordan. She wants to be “as active as possible in the Indiana music world. There are a lot of exciting opportunities here.”