Kaylin Beckwith is a first-generation college student. Neither of her parents attended college — her father joined the Marines straight out of high school and her mother came from a family where higher education wasn’t a priority. As a junior in high school, a self-motivated Beckwith knew she wanted to get out of small town Elkhart, Ind., and pursue a college degree at a notable university.

“Although my parents didn’t go to college, I think they wanted me to go,” Beckwith said. “They didn’t push me to go because I was already so eager to do so, but once everything became official, they were definitely very excited for me.” 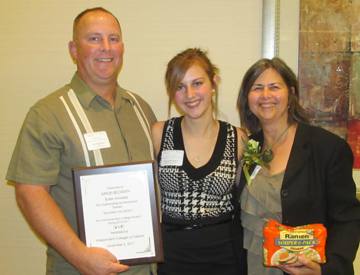 Now a sophomore exploratory studies major at Butler, Beckwith says she couldn’t picture herself anywhere else. She balances a busy 17 credit hour class schedule with a job, volunteering, campus involvement and, more recently, planning her own wedding. She also added one more achievement to her resume this year: Beckwith was one of 31 Indiana students honored with a “Realizing the Dream” award on Nov. 5.

“Realizing the Dream,” presented by the Independent Colleges of Indiana and the Lilly Endowment Inc., recognizes the triumphs of first-generation students in their first year of college. The student honorees are Indiana high school graduates who subsequently demonstrated superior academic performance during their first year of studies and exhibited leadership in campus or community activities.

Honorees received a $2,000 grant to put toward the cost of their education.

Beckwith was nominated for the “Realizing the Dream” award by academic advisor Jill Mattingly.

“Kaylin is a phenomenal young woman,” Mattingly said. “I nominated her for the Realizing the Dream award because I wanted her to be recognized for her hard work and determination. She has put so much effort into accomplishing her goal of attending Butler and that dedication deserves to be rewarded.”

Beckwith is a Lilly Scholar and an Honors student. She is involved with the on-campus organization To Write Love on Her Arms — a group that is dedicated to presenting hope and finding help for those struggling with depression, addiction, self-injury and suicide — and has volunteered at Brooke’s Place — a non-profit organization that provides support to grieving children and families — since her freshman year. She also works in the after-school care program at the International School and interned with Big Brothers, Big Sisters over the summer.

While she hasn’t officially declared a major, Beckwith hopes to double major in art and psychology with a minor in Spanish. She is interested in pursuing a career in art therapy after learning about the technique from counselors at Brooke’s Place. With so much on her plate, she admits that it’s not always easy.

“Sometimes it’s hard for my parents to understand what it’s like for me at college since they didn’t have the experience,” Beckwith said. “My dad thinks that a triple major sounds like a great idea, whereas my mom is the complete opposite and worries that I take on too much.”

Now that Beckwith has her sights set on a career in art therapy, she and her parents couldn’t be more excited.

“My experience at Butler has been amazing, and now that I’m interested in art therapy, I can’t wait to take different art and psychology classes,” she said. “I never thought something like this was available to me until I received that [Lilly] scholarship, so I was thrilled that I had the opportunity to attend a school like this.”