When Gary Walters MM ’08/adjunct professor of music was inducted into the Indianapolis Jazz Hall of Fame on Dec. 15, he was elsewhere, doing what he’s been doing for the better part of 40 years: playing a gig.

Walters was on piano that night in the Indianapolis Symphony Orchestra’s annual Yuletide Celebration, one of the many ways he sustains himself as a working musician. 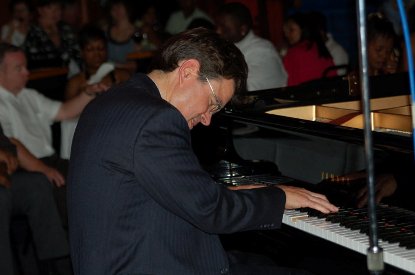 “It’s exactly what is normal in my world,” he said.

Nevertheless, Walters said, he’s honored to be inducted into a Hall of Fame that puts him in the company of worldwide jazz luminaries such as Wes Montgomery, Freddie Hubbard and Duncan Schiedt as well as local favorites including Claude Sifferlen, Cathy Morris and Steve Allee.

The Indianapolis Jazz Hall of Fame classes have been selected every year since 1998 by the Indianapolis Jazz Foundation, of which Walters is a board member. (He was not part of this year’s selection committee.) Ceremonies to induct the Class of 2011, which also includes Allen “Turk” Burke, Carl Hines, Gene Markiewicz and Steve Weakley, were held at the Jazz Kitchen.

“Gary is truly deserving of this honor,” said Matt Pivec, Butler’s director of jazz studies. “Not only is he a first call jazz pianist in town, but his diverse stylistic capabilities have made him successful with organizations/artists such as the Indianapolis Symphony, Carrie Newcomer and the Icarus Ensemble. He is also an insightful teacher and a great colleague. We are truly fortunate to have him at Butler.”

Walters grew up on Indianapolis’ Eastside and has been playing piano since elementary school. He concentrated more on percussion at Howe High School in Indianapolis and Ball State University because he wanted to play in the school bands. He ended up with a Bachelor of Science in Music Education from Ball State, where he minored in classical piano.

After graduation, he auditioned for several small orchestras but found too many people competing for too few percussion jobs. So he went back to piano full time.

Over the years, Walters has become well known in Indiana music circles for his variety of work – with the jazz quintet Small Talk; as a sideman for jazz musician Cathy Morris and acoustic performer Carrie Newcomer; playing pops concerts with the Indianapolis Symphony Orchestra; with the Feinstein Foundation’s Great American Songbook performances; and as a solo performer. He released his first solo CD, Moments in Time, last year.

He began teaching at Butler in 2000 after getting a call from Mark Buselli, who was running the University’s jazz program at the time. Buselli had a student who wanted to study something other than classical piano. Walters now teaches Jazz Piano, Jazz Keyboard Skills (for non-majors) and is director of Jazz Combos.

“I have found him to be one of the most generous and nurturing educators I have worked with,” Butler student Eli Uttal-Veroff said. “He treats everyone of his students like family. Gary also has a special way of getting his students to find ways to answer their own question and give themselves ownership of their education.”

One of the things Walters has been able to do as a teacher is model how to conduct a career. He approaches work as a musician, not as someone who plays one particular style.

“There’s a lot of opportunity to make a living making music here,” Walters said. “I’ve always, by my own choice, chosen to play a variety of music. I love jazz and I’m honored that the Hall of Fame chose me. But I’ve told folks before: I can’t eat steak every night, as much as I love steak. I love jazz, but I love to play other styles of music because I love to hear other styles of music.”

As far as being inducted into a Hall of Fame goes, that “was never a goal,” he said.

“But,” he said, “it is very nice that they put me into that group of great players.”