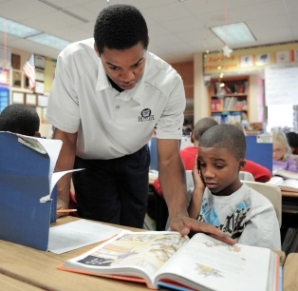 Woods has previously covered Nored’s activities as a point guard for the Butler Bulldogs men’s basketball team, including his play in 13 NCAA tournament games.

The education major told Woods that the stresses of collegiate basketball are nothing compared facing 32 third-graders every day.

A video and photo gallery accompanying the article show Nored in his North Wayne Elementary School classroom and on the court. In the video’s voice over, he describes fostering a love for learning and team spirit in his students.

Woods is also an adjunct journalism instructor at Butler.