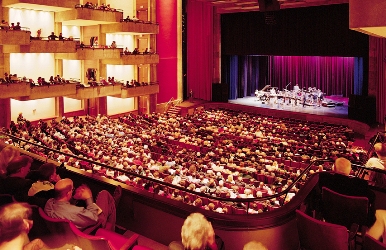 It’s the first time Clowes has appeared on the list, which is compiled by Pollstar magazine, the concert industry’s main trade publication. Clowes sold an additional 40,000 tickets that were not accounted for in time for publication, bringing the total to a staggering 145,000 tickets.

“It’s big to be listed, but to be listed at No. 53 is great,” Marketing Director Joshua Lingenfelter said. “One of the things we try to do is make sure agents know we’re available for booking. Sometimes, they just look at the Murat Theatre in downtown Indianapolis. This will open the eyes of promoters, artists and agents. Pollstar is everything in the live performance industry.”

Clowes was ahead of such renowned theaters as the Royal Albert Hall in London and the Fox Theatre in St. Louis. Radio City Music Hall in New York topped the list with 1.86 million tickets sold. The Murat and the newly launched Palladium in Carmel were not on the list. The full list is here .

Among Clowes’ biggest shows in 2011 were touring productions of “Beauty and the Beast” and “Rock of Ages,” concerts by John Mellencamp and Huey Lewis and a talk by former Indiana University basketball coach Bob Knight.

“Through a near-50-year history,” Lingenfelter said, “we continue to move in a positive direction.”