Ed Davis tells the story of hearing the Butler Chamber Choir sing at a holiday party in December.

“They wowed everyone with their enthusiasm and the quality of their performance,” he said. “They sang extraordinarily complex melodies and, when they left, the people were buzzing about the group. I realized then what a remarkable resource the Jordan College of Fine Arts is and can be to organizations, the community and the public in general.” 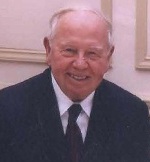 Davis will be helping to get the word out as the newest member of the Jordan College of Fine Arts’ Board of Visitors.

Davis, an Indianapolis native, is retired from Eli Lilly and Co., where he was vice president of corporate affairs. He also was a Fellow at the Center for Business and Government at the Kennedy School of Government at Harvard University and Visiting Scholar at Green College, Oxford University, where he conducted research on British and European health policies and organizations.

He also has a long history with Butler. In the 1980s, then-University President John G. Johnson asked him to be part of the commission on the future of Butler University. Davis chaired the task force on the fine arts, which recommended, among other things, building a medium-sized concert hall.

From roughly 1995-2007, Davis served as an Executive-in Residence in Butler’s College of Business and as an instructor in the University Honors Program.

In September, he and Jordan College of Fine Arts Dean Ron Caltabiano met at an Indianapolis Opera production of Madama Butterfly. They bonded over their shared view that the arts are “a powerful way of learning” and undervalued as part of a liberal arts education.

“I’m impressed with the programs Ron’s moving forward that have been successful, as well as some of his new ideas,” Davis said. “His community outreach efforts are very dramatic and very encouraging.”

Caltabiano is glad to have Davis’ input in the Board of Visitors, which supports the mission and objectives of college through development, direct contact with students and by providing links to the Indianapolis arts, business and professional communities.

“Edgar Davis brings tremendous enthusiasm for being involved,” Caltabiano said. “That enthusiasm, along with his long experience on non-profit boards, including the Indianapolis Symphony Orchestra Board, will make him a valuable member of JCFA’s Board of Visitors.”