Butler Music Professor Eric Stark and 22 members of the Butler Chorale saw Madonna’s four-song Super Bowl halftime show from a perfect vantage point – the stage at Lucas Oil Stadium, where they were part of a 200-voice choir (and 500-person entourage) that performed the set-closing number, “Like a Prayer.”

Their participation was a secret until game time – so hush-hush that everyone involved had to sign a confidentiality agreement – but worth every clandestine minute, Stark said. 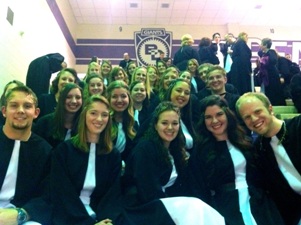 “The students were just crazy about it, and they had a blast,” he said. “I feel really good about that. They saw high-quality production happen, and how it happens, and the level of perfection that’s expected.”

In mid-January, the halftime show casting director called Stark, who’s also the director of the Indianapolis Symphonic Choir, looking for 70-80 singers. She told him she wanted a variety of looks, ages, races. He signed up about 45 symphonic choir singers, then went to his students in the Butler Chorale.

Stark said he sorta, kinda had to hint around at first. He told them he had something to tell them, but only if they promised to keep it to themselves. No Facebook, no tweets, no conversations with parents or roommates. Nothing.

When they agreed, he mentioned something about a big event coming to Indianapolis in a couple of weeks.

“Then, when I got the words ‘halftime show’ out, they figured out what was going on,” he said.

He told them he couldn’t grant them permission to miss classes, nor could they tell anyone why they were missing classes.

The first rehearsal was Jan. 26 at the Arsenal Technical High School gym in Indianapolis. There, the casting director asked Stark if he would consider helping them prepare the choir, which also included some local singers from area churches and an African-American choral ensemble from Indiana University.

He agreed – and soon was introduced as the choir director.

“So I’m going to put on my bio: chorus master for Super Bowl XLVI halftime show,” he said with a smile.

Subsequent rehearsals were held Jan. 28 at the high school in Fortville and in Lucas Oil Stadium the Wednesday, Thursday and Friday before the game. Those latter practices sometimes ran seven hours. They also had a final run-through at 1 p.m. the day of the performance.

Stark didn’t get any face time with Madonna, but he walked away inspired by her work ethic and attention to detail. He blogged about the experience at http://indysings.blogspot.com/

“She clearly was the vision behind the whole thing,” he said. “She was hands-on and completely involved in every detail. On Thursday night, she spent an hour with the head makeup and head costume person going through the singers, through the drumline, the gladiators to look at everybody’s costume. She wants to see what she wants to see. She’s incredibly sharp. She has incredible focus. I’m really impressed with how well it worked – and I was really impressed with her.”