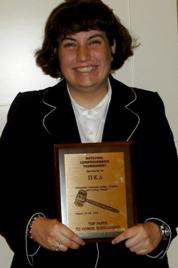 A biology and communication studies major from Minneapolis, Lupkowski wrote her winning entry “Sites of Infection for Candida Albicans in Human Hosts and Virulence Factors” for a fall 2011 capstone course taught by Professor of Biological Sciences Thomas Dolan. In February, she won state honors for paper written in a course on media and cultural criticism.

With 68 schools participating, the 2012 tournament was the largest ever hosted by Pi Kappa Delta.