The story Professor of Religion Paul Valliere tells in Conciliarism: A History of Decision-Making in the Church reaches back to the earliest days of Christianity. But he intends that the book will lead readers forward, not backward, in their faith. 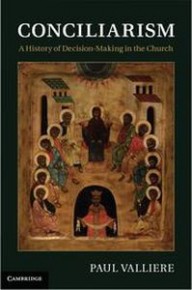 Being published by Cambridge University Press in March, Conciliarism provides a comprehensive overview of Christian Church councils and how Christians have employed them to address internal conflicts since the late 2nd century. The author said he hopes his book can “help contemporary churches of all denominations be more aware, more self-conscious, more self-critical and, hopefully, more effective in their decision-making.”

The term “conciliarism” refers to the practice of convening councils — groups of leaders drawn from the broad base of church membership — to resolve divisive issues.

“It’s not just small groups or just a part of the church making the decision. Bishops are always key players, but they are not the only participants, ” Valliere said. Councils provide a middle way, he said, between hierarchy (vertical, top-down decision-making) and popular democracy (decisions by majority vote).

Church council members gather with the specific intent of reaching agreements that will preserve their fellowship as believers in Christ, Valliere said. Consequently, church councils must reach final decisions by strong majority consensus, if not unanimity, rather than by close votes.

“You can’t have a 51-49 split on a theological issue,” Valliere said. “When such decisions happen in a secular legislature, the losing side accepts its loss and looks toward winning the next issue. That’s not the way it works in a church. Close votes usually lead to schism and breakdown of church unity.”

The current need for councils is clear to Valliere. “In my church, the Episcopal Church, we are currently in the middle of the largest schism in our history because of bad decision-making,” he said.

Episcopalians are divided over the ordination of openly gay individuals as bishops. The same issue is dividing the worldwide Anglican Communion, of which the Episcopal Church is a member. The consequences of this conflict will be a topic of debate for the 1,000 deputies of the Episcopal Church’s triennial General Convention, the denomination’s supreme decision-making body, scheduled to meet in Indianapolis in July.

Other denominations, such as Orthodox Christianity and Roman Catholicism, are also struggling with decision-making, he said. “Rome can’t figure out what to do with the [now 50-year-old] legacy of Vatican II, or whether another council of similar scope is imaginable in the 21st century.”

Valliere says that his book will be “controversial.”

“It’s critical of contemporary Episcopal and Anglican practice and doesn’t hold back on Catholic and Orthodox issues, either. The criticism is, I hope, constructive.”

There are hopeful signs for the future of Christianity, Valliere said, such as the students in his “History of Christianity” class who helped inspire his five years of work on Conciliarism.

“The students became excited when they — many for the first time — learned about the historic resources of the Christian Church for social improvement and spiritual renewal. The Christian tradition is a treasure trove of ideas on how to fix a community,” he said. “I caught their excitement.”

He thanks the students, as well as several Butler colleagues, in the acknowledgements section of his book.

Valliere’s work on the book was supported by the Alonzo L. McDonald Family Agape Foundation and the Center for the Study of Law and Religion at Emory University.