For the past year, Butler Chemistry Professor Anne Wilson has traded in her Gallahue Hall lab for one at Dow AgroSciences in Indianapolis. She’s spent the past year in a sabbatical position in the agricultural chemistry business, helping the company toward its goal of providing game-changing technologies to improve crops, plant nutrition and control of destructive crop and non-crop disease, weeds and insect pests. 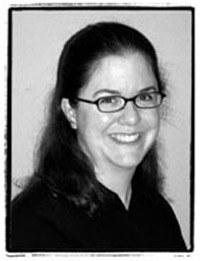 “It has been a fantastic experience at Dow,” Wilson said. “I worked on a couple of projects in Discovery and I’ve now moved on to Specialty Synthesis, working on early-stage process chemistry. I have a good feel for what industrial chemists do, and I am looking forward to taking the lessons I have learned at the bench back into the classroom.”

In the Discovery chemistry area, she spent time looking at everything from initial compounds that might be of interest to products that may go into development. The early-stage process research involves developing methods to make compounds on a much larger scale.
The sprawling Dow plant on the northwest side of Indianapolis – where the pest controls Spinosad and Spinetoram were developed – contains several greenhouses where plants are grown for use in experiments. Wilson said she has been able to test the compounds she’s developed and find out whether they’ve been successful.

“It’s instant gratification,” she said. “I’ve been able to see the results of tasks on their target within weeks of submitting my compounds. That’s very exciting.”

Wilson said she began looking into the job with Dow AgroSciences in August 2010. When the position became available, she applied for a yearlong sabbatical, which Butler granted. Wilson said working for Dow has given her the opportunity to explore and be part of the latest advances in chemistry.

In addition, she’s made contacts that can help her, Butler and Dow, and she’s learned lessons that she plans to bring back to Butler this fall. They include:

-Safety. “The culture here is that safety is paramount,” she said. “And there are certainly things that we can do at Butler to train our students in safety. I’ll definitely have to work with my colleagues, but, if we work with the students early on safety, it will be part of their culture as well. Easy changes like transporting chemicals more safely and being vigilant about wearing personal protective equipment will be the first things I tackle.”

-A sense of collaboration and teamwork. “That has been so important to my success here. It’s not just a team; it’s a team with a sense of purpose.” Dow has a reward system by which colleagues can nominate one another for awards, especially regarding teamwork and collaboration. “People who do good work are recognized routinely. People support one another doing well. I like that.”

For Dow AgroSciences, bringing in a professor like Wilson is in keeping with its desire “to collaborate with world-class institutions to produce solutions, and an opportunity to work with an excellent scientist,” said Bill Kleschick, Dow’s director of discovery research. “Having Anne spend the past year with us was a great experience, and we will continue to benefit from stronger ties to Butler for years to come.”

In the fall, when Wilson returns to teaching, Butler Associate Professor of Chemistry Olujide Akinbo will join Dow’s staff for the semester. Wilson said Akinbo’s work, coupled with hers, will create opportunities for additional collaborations with Dow, as well as open up possibilities for National Science Foundation academic liaison grants.

“This is fertile ground,” Wilson said, “and I’m really excited about it.”

Wilson grew up outside Washington, D.C., and went to Oberlin College in Ohio intending to be an English major. That first semester, she also signed up for chemistry and found that she enjoyed the lab work in particular. Her instructor recommended that she take organic chemistry the next semester.

She changed her major and went on to earn a doctorate from the University of Utah. In the mid-1990s, while doing post-doctoral work at Florida State University (“I took a cross-country tour through my educational pursuit,” she said with a smile.), she applied for a teaching position at Butler.

Dow is Wilson’s second “industrial experience.” Her first, in 2004, was a six-month sabbatical with Eli Lilly and Company.

She said experiences like this make her a better professor.

“The things we teach in the textbooks, that’s old chemistry,” she said. “They don’t put the stuff that’s cutting edge in a sophomore organic textbook.”