Butler University Athletics’ logo will be displayed on the car Ed Carpenter ’03 drives in Sunday’s 96th running of the Indianapolis 500-Mile Race.

“I am so thrilled to have the Butler Athletics logo adorning our Fuzzy’s Vodka Chevrolet,” said Carpenter, who won at the Indianapolis Motor Speedway just a few days after graduation in 2003 when he captured the Freedom 200 Indy Lights race. “We have had so much support over the years from the Butler alums, students, facility and fans that it will be an honor to carry the Butler colors this Sunday in the race.” 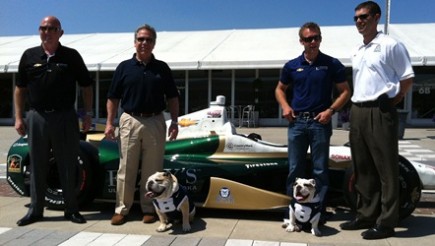 Butler’s logo on Carpenter’s car marks the first time the school colors will be carried on a car in the 500. Carpenter is one of the few college graduates in the 33-car starting field.

This year’s race marks the first time Carpenter has entered the event as a team owner with Ed Carpenter Racing, which debuted in March in St. Petersburg, Fla. Carpenter is the only team owner/driver in Sunday’s race. The Indy 500 marks the team’s fifth start in the 2012 campaign, and this is Carpenter’s ninth Indianapolis 500. (More information is available at edcarpenterracing.com.)

“Ed Carpenter is certainly one of Butler’s most prominent alumni and we are honored that he will proudly display the Butler colors for the Indy 500,” Butler President James M. Danko said. “Ed is not only a highly capable driver and Izod IndyCar Series race winner, but off the track he conducts himself in a manner representative of the Butler Way. Seeing the recognizable Butler Bulldog logo take the green flag on the side of the No. 20 car this Sunday will be a proud moment for the entire Butler family. We’re all pulling for Ed and Ed Carpenter Racing to represent Butler all the way to Victory Lane.”