Space aliens are attacking Gary, Ind., and the Master Chief isn’t happy. Well, not all of Gary – just the old Gary Screw and Bolt Factory. 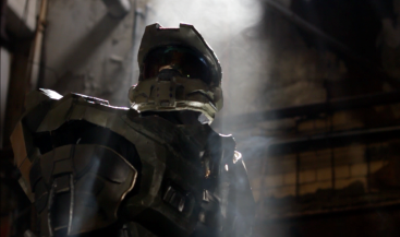 The Master Chief (also known as Butler student Dan McCullough) is the super-soldier hero of the Halo video games. He’s featured in a fan trailer shot at the factory by Trevor Roach, Elyssa Garfinkle and Aaron Fletcher for their Creative Media and Entertainment capstone course in the College of Communication.

The video was conceived as a promo for the fourth edition of the Halo franchise, “The Return,” being released in November by Microsoft. Roach described the 2½-minute video as “the Battle of Fallujah meets Transformers in Gary.”

It shows space marines from the future battling alien ships, and the Master Chief walking through the aftermath. “There’s no dialogue,” Roach said, “which keeps the action tight and quick. That’s a plus on YouTube. One of the tricks was we didn’t show the enemy, since this element of the new game hasn’t been revealed yet.”

The students received permission from the city of Gary for two days of shooting at the long-abandoned factory. With its broken windows, debris-strewn floors and shadowy interiors, Roach said, the factory suggested a realistic battle scene.

“It was a mess. There were holes in the floor where there was a 30-foot drop. Another large break in a brick wall looked like it could have been caused by mortar rounds.

“It’s not often you see students get approval for something like this.”

Roach and Fletcher planned and directed the video’s action. Garfinkle served as production manager, coordinating props and actors for the shoot. She also portrayed a solider in the far background of some scenes. Other student actors included Tommy Balestreri, Andrew Bindrim, Garrett Roach and Devin Roach.

Trevor Roach began building props and costumes for the video last fall. “I started with cardstock and paper, then strengthened it with fiberglass, resin and cloth,” he said. “I think our video will stand out from other Halo fan videos. Our cinematic values are better.”

He said the most difficult part was the modeling and texturing of the Banshee and Pelican – which ended up being cut from the project – and then composting them into the live-action shots.

“This was also one of the most fun parts of the project because of the challenge it created, not to mention the reward of being able to step back and look at the entire project and knowing that a couple months ago all we had was an idea.”

Working on the video taught him “a strong appreciation for reliability,” Fletcher said. “There were only three of us working on the production so we each had a lot of responsibility to complete this project and step up strong when it was our moment. It was a great end to my college experience to work with other students equally passionate and dedicated about the industry.

Roach said that he, Fletcher and Garfinkle – all 2012 graduates – hope that the trailer will “show future employers what we’re capable of. It would be awesome if Microsoft sees it.”