Butler University 2012 graduate Will Alexander has been selected for the inaugural class of Alfred Fleishman Diversity Fellows. 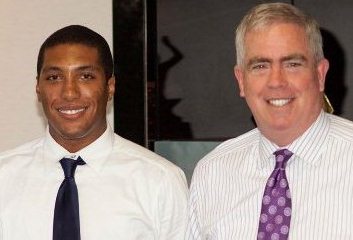 On July 12, he began a six-month assignment in the New York City office of Fleishman-Hillard International Communications, a leading strategic communications firm with 80 offices around the globe. He is working with the Sports Business/Corporate Group in Financial Services Practice, supporting clients such as EA Sports and Visa.

“In just one week, I have gained insightful and practical information about client relations and management, teamwork, strategic communications and media relations,” Alexander wrote in an email.”

“Fleishman-Hillard is committed to being a vanguard in the PR industry, which is reflected in its success as a company, the many awards and honors its campaigns receive and its emphasis on inclusion and diversity — something that personally resonates with me and what initially appealed to me about the opportunity,” he said. “The chance to work in the ‘Big Apple’ was an extra incentive for me to accept the fellowship and grow in a different way.”

Following this initial period of service, Alexander and the five other fellows will be evaluated and possibly offered an additional six months with the company. After one year, and successful completion of the fellowship program, participants will be considered for employment with Fleishman-Hillard.

Originally from Nashville, Tenn., Alexander earned a bachelor’s degree in communications and public relations through Butler’s College of Communication.

As a senior, he was part of a four-student team that developed a childhood fitness promotion for the Christamore House in the Haughville community on Indianapolis’ west side. The team’s program received honorable mention in the National Public Relations Student Society of America 2012 Bateman Case Study Competition. Only 15 of the 70 Bateman entries submitted nationwide received honorable mention.

Alexander is pictured left, with Dave Senay, president and CEO of Fleishman-Hillard.