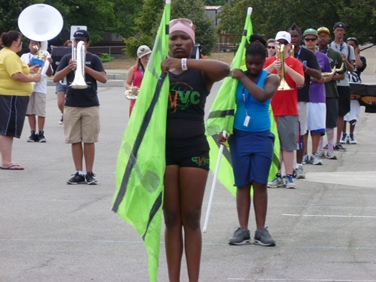 The practice paid off Aug. 3, when Shortridge placed 25th in the competition’s field of 46 bands — their best ranking yet in the three years they’ve been competing.

“I think today was by far the best performance we’ve ever had,” said band director Kathy Spangler ’98 MM ’02 in an Indianapolis Star interview. “It was a great experience today. The kids were excited; they had a great show. They’re proud of what they did.”

Shortridge was the only IPS school to participate in the 2012 competition.

Spangler said some Shortridge seniors have played all three years of the band’s existence. “It’s cool how they’ve matured, and the whole band has gotten more efficient at learning routines,” she said. “They’re working really hard.”

Read a Star feature about the band’s progress.