Ben Niespodziany Puts His Journalism Degree to Good Use

Maybe they should call the Peace Corps “the toughest jobs you’ll ever love.” Ben Niespodziany ’10, who’s in his second year as a volunteer in Machala, Ecuador, finds himself using the Spanish and journalism he majored in at Butler to help him in the four positions he holds right now — teaching English, editing a magazine, working with students and senior citizens after school and helping out at the local library.Not that he’s complaining.“I have been here for one year and have one more to go,” he said via e-mail, “and I’ve been loving every minute.” 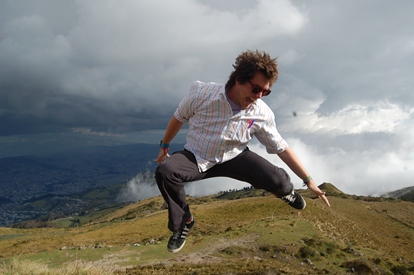 In addition to all the work, he’s also had experiences he’ll remember forever. Like climbing Chimborazo, the tallest mountain in Ecuador. “Because it is so close to the equator, it is the furthest point from the center of the earth,” he said. Hiking with an indigenous tribe to celebrate its “Mother Moon” rituals. Learning to fish. Killing chickens and guinea pigs and eating them, performing in a Christmas dance with a senior citizens group, and celebrating New Year’s on the beach with thousands of Ecuadorians, all of whom burn giant paper-mache figures at midnight.Niespodziany (pronounced Ness-pa-johnny) is part of the Youth and Families Department of the Peace Corps, working with an adolescent development organization called INFA (Instituto de La Niñez y La Familia). His biggest project at the moment is as an English teacher at a local elementary school, teaching 162 students in kindergarten through seventh grade.He helps students after school with their math and science homework, and he also visits homes to hand out scholarships that help pay for school supplies for students who can’t afford them. His library volunteer work includes giving reading, writing and art lessons to elementary school kids and working with a group of senior citizens.“We normally eat, gossip and dance,” he said.And now, he’s taken on the role of editor-in-chief of El Clima, the Peace Corps’ magazine in Ecuador. His first issue comes out in either late July or early August.“Prior to being editor, I was doing book reviews, funny stories and creative writing,” he said. “The magazine is great because it delivers all outlets of writing, from art to recipes to jokes to photography to personal accounts to interviews.”Niespodziany decided to apply for the Peace Corps after graduation. Following a number of interviews — and a year of waiting — he was accepted. Once in Ecuador, the opportunities kept coming. He got the elementary teacher job because his friend’s wife is the kindergarten teacher and “he let me know they needed an English teacher, but couldn’t afford one.” He got the editor’s job simply by asking the previous editor, who is done with her service this month.Life in Ecuador does have its drawbacks, he said. He lives on the coast, where it’s hot every day. In mid-July, which Ecuadorians consider “the cold season,” temperatures are in the low 80s. In January, February and March, the thermometer hits triple digits every day, it rains almost every night and mosquitos are rampant.He misses his family and friends, Chipotle burritos, free refills, driving (Peace Corps volunteers can’t drive in their host countries), having Internet at his house, and seeing concerts. He also misses bagels. “Loneliness tends to be one of the bigger negative results of Peace Corps, but I combat that by going to nearby waterfalls, visiting the beautiful beaches of Ecuador, hiking a (non-active) volcano, and meeting up with other volunteers in the country, which is always a great time and good conversations,” he said. “Life is beautiful.”Niespodziany said the experience has added to what he learned at Butler. When he comes home in a year, he’ll be completely fluent in Spanish. He also will have learned how to teach at an elementary level, something he’d never done before.Ultimately, he feels like he’s making a difference. “While I don’t think that I will return to the United States and Ecuador will be a changed country, I do think that the kids and the communities that I work with will be better off after two years of my assistance,” he said. “Although I’m teaching English, I do not think it is necessarily important (nor do I expect) for these kids to be able to converse in English by the time I leave. But I do think they will have a better grasp of creativity, imagination and excitement in school. I like to think that they look forward to my sessions with them. And if I have achieved that much, then my work here is done.”