The high school students participating in the PRO 100 program at Butler this summer weren’t the only ones getting on-the-job experience. Rising Butler senior Isaac Adams and junior Shelbi Burnett, both secondary educaiton majors from Indianapolis, gained practical experience mentoring and teaching the teenagers throughout the six-wek session. 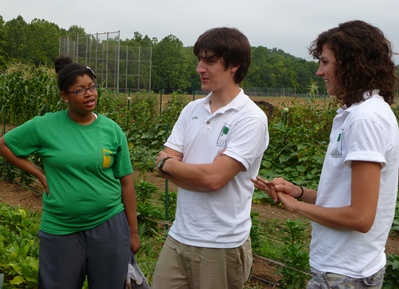 Adams hopes to be licensed as a physics teacher. Burnett, the only female college intern for the 2012 program, is concentrating in biology (and was named to an academic all-district team in cross-country.)

They both earned College of Education (COE) credits for developing and teaching lessons to the PRO 100 participants. Lessons covered topics ranging from leadership and public speaking to blogging and college exploration.

“A couple times we thought the students would latch onto ideas [in planned lessons], but they didn’t,” said Adams. That gave Burnett and him practice in adjusting their lesson plans on the spot, and reaching for back-up plans, practices recommended in the COE curriculum.

Being able to work with the PRO 100 students challenged her notions of teaching adolescents, Burnett said. “It was a chance to make education creative and effective. “

She said her COE course on classroom management came in handy, when occasional disciplinary situations cropped up. “Kids want things to be fun, so it’s always a struggle to remind them of the program’s more serious aims for them. “

Both appreciated the authoritative presence of PRO 100 coach Cletus Morris , a veteran Indianapolis educator. “He was very good at organizing the kids, seeing who’d be good at what task and making sure they rotate jobs,” Adams said.

This spring, Burnett and Adams worked with other education majors to develop an edible schoolyard project at the IPS/Butler Laboratory School, as a capstone project for a course on educational leadership taught by Professor Catherine Pangan. That project made Burnett curious to see PRO 100 students’ reactions to working in Butler’s Urban Farm.

“I hope they gain an appreciation for where food comes from, and maybe be encouraged to grow their own food,” she said.

Each week, PRO 100 participants visited one of the five Indianapolis university campuses hosting the 2012 program. Students from each of Butler’s six colleges spoke to the visitors about majors and career options; Burnett and Adams represented the COE.

In their presentation, Burnett said, she and Adams asked the high school students to “think of their image of a teacher and draw the qualities that make a good teacher.” If they could see those qualities in themselves, she told the teenagers, they might consider becoming teachers.

“Three or four of the kids said they definitely wanted to come to Butler,” Adams said.