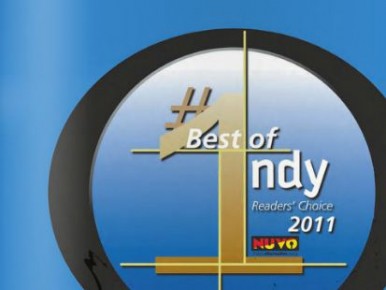 The poll was released in the July 25 edition of the weekly paper.

“Take a closer look at any of Butler’s departments,” the paper wrote, “and you’re likely to find hard-working, risk-taking students and professors trying out new approaches to benefit the student body and the community at large. Stop by the Center for Urban Ecology, which just picked up a three-year grant to help the school engage with city leaders on sustainability and food issues. Or the Efroymson Center for Creative Writing, a new home for visiting writers and a nascent, student-run publishing house. Catch a show by Butler Theatre during its yearly, consciousness-raising international theatre residency. Or traipse across the Pharmacy Building’s new green roof, installed in March.”

About Butler men’s basketball, Nuvo wrote: “Another successful run in the world of local sports came to an end this year, with the Butler Bulldogs posting a 22-15 record that wasn’t quite good enough for either the NCAA or NIT tournaments. But that doesn’t mean the team isn’t benefitting from past glory. Last season was Butler’s final in the Horizon League. Next season [nearly] all of Butler’s athletic teams will transfer to the more high-profile Atlantic 10, with the basketball team playing Xavier and St. Louis twice, and the other teams in the conference once.”