Despite relentless July heat and being two generations older than the 14 teenagers he was working with at the Butler Urban Farm, Cletus Morris pitched in with the PRO 100 team shoveling mulch and pulling weeds. “I told them that the 15 of us could do anything,” he said. 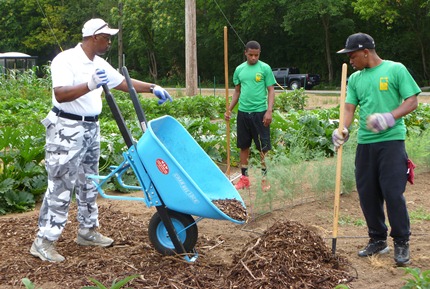 A former Marine and veteran Indianapolis educator with a master’s in school counseling from Butler, Morris joined the PRO 100 program in its first year and has spent the past 31 summers coaching an average 16 students ages 14-17 each season.

“I have real expectations for them. I don’t leave much room for negotiation,” he said. “In the real world, nothing is going to be given to you without sacrifice.”

He models his serious, “old-school” approach to hard work on two men: his father, who supported a large family, and on PRO 100 founder Gene Glick, an Indianapolis businessman. Glick was “a straightforward man,” Morris said, who “required excellence” from PRO 100’s staff and participants.

“Kids give what you give them. If you don’t give them respect, they won’t give it,” Morris said. “I try to be fair, firm and consistent. I let them be themselves, but I don’t like embarrassing situations.”

He was impressed when the Butler PRO 100 students realized they could control their group’s dynamic. Some participants persisted in talking smack about others. Not only did Morris admonish them, but the remaining students ultimately requested additional discussion time to resolve the issue.

A graduate of Arsenal Technical High School in Indianapolis, Morris served as a U.S. Marine in Vietnam, guarding embassies and taking part in the U.S. military’s departure from that country. Following service, he began his career in student discipline administration for Indianapolis Public Schools (1981-85, 1997-present) and Perry-Meridian Schools (1985-1997). This fall, he begins work at John Marshall High School.

Morris received his bachelor’s degree from Indiana State University. His involvement with PRO 100 prompted him to earn a master’s degree in school counseling from Butler’s College of Education in 1996. “I wanted to expand my knowledge base,” he said.

Several former PRO 100 participants have told Morris that the program made a difference in their lives, but few have spoken as strongly as one girl on his first PRO 100 team.

Raised in an impoverished family on welfare, the girl learned her own value through PRO 100 and Morris’ coaching, and vowed to change her prospects. Today, she is a respected Indianapolis pediatrician, who has spoken publicly on behalf of PRO 100.

Morris said the same girl made him reconsider what physical labor female students could handle, compared to males. “She showed me, there’s no ‘girl jobs’ or ‘boy jobs’ — there’s just jobs .”

“I hope I’ve been teaching these kids to fish,” Morris said.