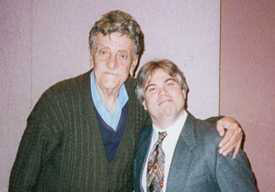 Both discs were released in June on Clark’s own label, Keuka Classical. They’re available through iTunes, amazon.com and CD Baby.

Clark and Vonnegut became friends 15 years ago and collaborated on five CD projects. For this final one, recorded in the months before Vonnegut’s death in 2007, the author read selections from the books before composer Howard Cass finished the music.

“Shortly after, Kurt died,” Clark said. “We performed the piece many, many more times, finally found the right combination of musicians that we’re really thrilled with, and got them into the recording studio.”

Trail of Tears also has a Vonnegut connection: It was inspired by historian Howard Zinn’s book A People’s History of the United States. Vonnegut introduced Clark to Zinn.

“I was reading his book and was enraged that the Trail of Tears” – the forced relocation of Native Americans in the 1830s – “was never taught in our school,” Clark said. “I was reading a lot of history that I had never learned.”

Clark, a Binghamton, N.Y., native who’s going into his 10th year teaching at Butler, wrote the piece “Trail of Tears” in 2007 to commemorate the 20th anniversary of the Manhattan Chamber Orchestra. Over the next four years, he composed the other selections on the CD.

The music, while classically based, also contains elements of many styles of music and a variety of both acoustic and electric sounds. Clark said he’s practicing what he preaches to his students: Musicians today must be versatile and willing to experiment.

“It’s the 21st century musician being not just the artist, but the creator of the whole content: the collaboration with people outside your field – like Kurt Vonnegut, like Howard Zinn – the use of literature in music, and also the influence of the different styles of music,” he said. “For me, it’s the essence of the work I do. This is the ultimate creativity.”

That thought process should also extend to how a musician does business, Clark said. After recording close to 50 records over the past 20 years for large and small record labels, he decided the time was right to start his own company. Keuka Classical, named for a lake in New York State where Clark performs annual summer concerts, allows him the freedom to publish, record and own the rights to his projects.

Clark said the idea came from renowned composer Philip Glass, whom he has worked with on film scores.

“He emphasized self-publishing, because then you always have control of your material,” Clark said. “It’s always in the condition you want it, and you’re responsible for it. We’re the ones who get the funding and the grants. We’re the ones who pay the musicians and do all the work. It’s all our creative work. Why should we just turn it over to some company that takes 90 percent?

“It was a good learning experience to record for those labels,” he added. “A lot of fun, don’t regret it a bit, never do it again.”