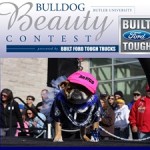 The deal to sponsor the contest – which this year will take place at 2 p.m. Saturday, Oct. 20, on the north side of Norris Plaza — came about thanks to Butler’s relationship with Don Hinds Ford in Fishers, which also supplies the Blue II Mobile for Butler’s live mascots.

“The added support Built Ford Tough Trucks brings to Butler’s Bulldog Beauty Contest is tremendous,” said Michael Kaltenmark, Butler’s director of web marketing and owner of Blue II and Blue III (Trip), the University’s live mascots. “Over the last decade, the Bulldog Beauty Contest has become one of the most anticipated events of Butler’s Homecoming. The connection is between Built Ford Tough Trucks and one of the toughest dog breeds around is only natural.”

More than 130 bulldogs participated in the 2011 Bulldog Beauty Contest. Registration information for this year’s contest is at: https://secure.www.alumniconnections.com/olc/pub/BUU/event/showEventForm.jsp?form_id=128574. The contest is for bulldogs only.

Dogs will be judged in 10 different categories, including cutest and meanest. More information is available at http://www.butler.edu/homecoming/bulldog-beauty-contest/competition.

This year’s contest will take place on the Ford Super Stage and include live video for better viewing as well as two sets of bleachers to accommodate 500 people. Ford will have trucks on display, including Ford Transit Connect, which is also known as the Blue II Mobile.