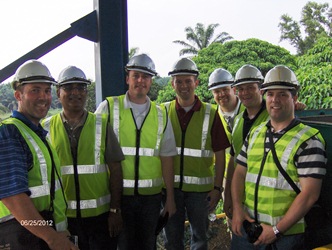 In June 2012, seven lucky Butler University MBA students took a six-day trip to Malaysia that allowed them to get a rare glimpse at business practices overseas.

After the lecture series, the students went on company tours, to places like Nissan Automotive and Palm Oil Economics, where they got to take a look at Malaysian business practices first hand and speak directly to some of the country’s top businessmen.

“I don’t even think we realized how much we were learning that first day until we took the tours,” Arauco said. “Then it really sunk in.”

The tours were the selling point of the trip for Arauco and fellow students Ned Torson and Nick Gaughan.

“A U.S. company would rarely open their doors the way they did for us in Malaysia,” Torson said. “You would just never get that close to the heart of the operations here.”

Gaughan agreed, and said every business “really rolled out the red carpet” for the MBA students. He said the open-door policy they were greeted with allowed him to clear up some misconceptions about Malaysian business that he went into the trip with.

“When we went to the Nissan factory, I expected to walk in on a highly automated very lean operation, and that was not the case,” Gaughan said. “When compared to some of the facilities I’ve been to even here in Indianapolis, in most cases our local businesses are several steps ahead. That was really interesting for me to see.”

“We might have an advantage now,” Arauco said, “but they are working hard, harder than ever maybe. So if we take steps backwards as an economy, while Malaysia and other countries are taking steps forward, we’re not going to be able to sustain our competitive advantage, which is what allows our standard of living to be where it is.”

Mahenthiran planned the trip so students would see exactly that. Mahenthiran, a U.S. Fulbright Scholar in Malaysia from December 2002 through July 2003, returned to Malaysia again in 2010 when he served his sabbatical at Monash University—Sunway Campus. At Monash, he was able to form connections with influential people like senior lecturer Jane Tong.

Tong, who specializes in international management, helped Mahenthiran work out the logistics of the trip. Mahenthiran said he “could not have done it” without her. Tong is now currently living in Indiana, serving her own six-month sabbatical here at Butler.

Mahenthiran said a trip like this “tries to get away from Western-centric thinking, and to show a point of view that is more Eastern; because when we say ‘Real Life, Real Business’ we mean it from a very global perspective,” he said.

Arauco, Gaughan and Torson said they hope Butler will offer more trips like the Malaysian program.

“The world is getting flatter every day, it’s inevitable—it’s already happening now, faster than people realize,” Arauco said. “Especially people who don’t go overseas or have a lot of international exposure. For me this trip was a no brainer. Dollar-wise, it was expensive, but man was it a cheap investment in the long run.”