By Margaret Power
College of Education 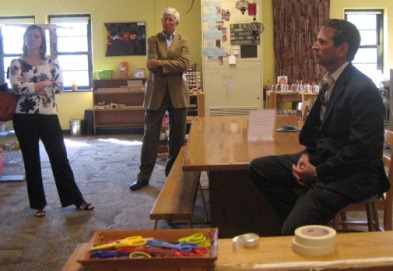 Corley and Miller took a tour of the school and visited classrooms where the principles of the Reggio Emilia philosophy are on display. Smith explained that students’ artwork and projects that decorate the walls of the classroom instead of teachers’ bulletin boards or displays as in traditional schools.

Lab School teacher and Butler COE ’11 graduate Mary Ellen Estridge spoke with Corley and Miller in her kindergarten classroom about her experience working at the Lab School in a variety of areas. Estridge described the Lab School as being very relationship-focused as well as focusing on a culture of respect for students and their abilities. This respect has become a part of the school culture with all stakeholders, including parents and community members and starts with the way Lab School teachers interact with their students.

Estridge, Shelley and Smith explained how the Reggio Emilia philosophy helps encourage children to be creative and curious. Corley added that teaching adults to have curiosity is difficult, and that to have dynamic, out-of-the- box thinkers in the business place, natural curiosity must be encouraged from a young age.

When asked by Corley what the hardest part of her job is, Estridge said, “The hardest part of being a new teacher was building culture because it is an ongoing process. It takes a long time to do successfully.”

Corley and Miller said that strong leadership toward building a positive working culture is the key to success in both education and business.