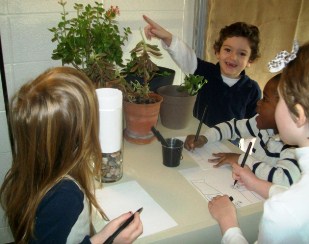 The Jan. 6, 2013, article by Scott Elliott noted the success of the program, jointly operated by St. Mary’s Child Center, IPS, and Butler at IPS School 60. In just its second year, the program has all students slots reserved until 2014. It is supported with funding from PNC Foundation and the Roberts Family Foundation.

Shelley called the IPS announcement “a great step forward for the district and our city.

“It’s another way to think about how we can close the gap we often see with children who have not had a strong early childhood foundation when they start school and are far behind,” she said.

Shelley said the plan demonstrates the forward thinking of IPS Superintendent Eugene White, a Butler trustee. White led recent efforts to implement full-day kindergarten throughout IPS, the state’s largest school district. As a result, about 75 percent of IPS’s incoming kindergarteners now start first grade with the basic skills they need, up from 50 percent before the program was in place.

When preschool is fully implemented for all four-year-olds, the goal will be to have more than 95 percent of first graders ready for school, White told Elliott.

Indiana is one of just eight states nationally that provides no state aid for preschool programs.