Sienna and Danielle like playing the same simple games. Lining up objects by color. Moving a family of dolls in and out of a dollhouse and giving them names. Preschooler Sienna announced that one of dolls was named “Danielle,” for her friend Danielle Markowitz, a sophomore studying psychology and criminology at Butler. 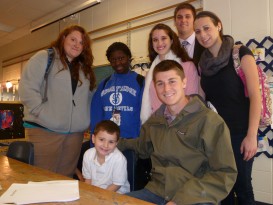 “Text and Ideas” students and a preschooler they mentor at the IPS/Butler Lab School.

Their friendship grew last fall at the IPS Butler Laboratory School, where Markowitz took part in a University Core course “Text and Ideas.” Students in the course read and discussed books such as Tuesdays with Morrie by Mitch Albom, Listening Is an Act of Love by StoryCorps founder David Isay, Werewolves in Their Youth by Michael Chabon, Drown by Junot Diaz, and My Father’s Tears by John Updike. The texts all touch on service to others, especially in the form of active listening and conversation.

As part of each class, the Butler students interacted with Lab School’s preschool students and teachers—reading books, playing games, and lending a hand in teachers’ daily tasks.

Markowitz’s time with Sienna was having the desired effect. Sienna is autistic, and people with autism typically have difficulty interacting and expressing interest in others. But “her teacher said that anytime Sienna would walk by, she’d look at my face,” Markowitz said.

Markowitz said she connected with Sienna by following the child’s lead. “I didn’t suggest new activities; I went with what Sienna wanted to do.”

Wendahl liked providing a positive role model for the preschoolers. “Since they know we’re from Butler, they know that they still have a lot of learning to do,” he said.

“You learn from the kids,” Burt said. “They know how to have fun. Every time we come in, we dance.”

He mentored preschooler Ben during some in-classroom projects.

Professor of Education Arthur Hochman and Professor of Pharmacy Bonnie Brown have co-taught “Text and Ideas” (“T & I”) four times now. Each class included opportunities for their students to work with young children and senior citizens.

People in those age groups—“the bookends of life,” as Brown calls them—are vulnerable, often isolated populations who are in need of service, she said.

Moving “T & I” classes to the Lab School when it opened in fall 2011 changed the nature of students’ service, Hochman said.

“In the past we always aimed for the ‘grand gesture,’” he said. “We found several problems with that. Service is only rarely about something large, noticeable, and public. Most of the time service is small and what is needed, so that those at the site can do their work.”

Large projects also took more time to complete than a semester allowed. Refocusing on the ideal of “small acts, big help” has made things easier for the hosts and ensured success for the Butler students, Hochman said. (Students in “Text and Ideas” can earn credit toward the Butler Indianapolis Community Requirement, under which Butler undergraduates must complete course-related community service to earn their bachelor’s degree.)

“It’s fun watching the kids grow,” Giles said. “It put us back to when we were in lower grades with less stress.”

That time wasn’t so long ago, considering that Giles and Buchanan-Schwanke are currently juniors at Shortridge Magnet High School. They took the Butler course through the Early College Program, which allows selected Shortridge juniors and seniors to earn college credits while completing high school.

Hochman said the two students, as well as 2011 ECP participants, have done well in the “Text and Ideas” classroom discussions and assignments. “We were part way through the semester before their Butler classmates realized Porche and Stephanie were from Shortridge,” he said. “Some even asked me if I knew they were high school students.”

Both Hochman and Brown say they’ve enjoyed team teaching with a faculty member from a different discipline and adapted each other’s instructional techniques.

“Bonnie has organizational skills that make the class cleaner and clearer than if it was just me alone,” Hochman said. “I really love that she brings a whole different perspective than I do. It’s better for the students. It adds so much depth.”

Hochman’s classroom methods are “all about getting students involved in conversation,” Brown said. Sharing stories about their siblings, parents and grandparents, about fun things they did growing up connect them to each other and to the Lab School students. The young kids are always willing to share about themselves.”

Talking to the older students, the children figure out how learning builds on itself, Brown said. “When they meet the Butler students, they say, ‘Oh, you already know cursive writing or addition and subtraction.’ They see that, at each level of school, they’re going to do more, and that education and growing up is doable.”