Butler Journalism Students Are Getting Their Work Published

In writing about the arts, students in Butler’s JR333 Performance Lab class have been all over the map. 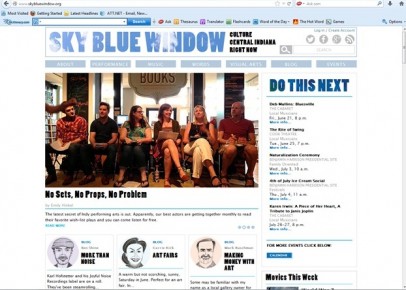 They never left Indianapolis, but they did get a world of experience: Their stories were published, and they were paid.

It’s all part of a partnership with skybluewindow.org, a new website created to cover the arts scene in Indianapolis. Students in the class submit their work—either print or video—to the editor at skybluewindow and, if it’s accepted, their story appears on the website and they get a check.

“This is a great way for our students to experience firsthand the quality standards of a professional publication,” said Nancy Whitmore, director of Butler’s Eugene S. Pulliam School of Journalism. “Student work does get rejected, but when it’s accepted the student instinctively realizes the level of knowledge and skill required to publish professionally. Moreover, the entire process reinforces the rigorous standards our students experience throughout our journalism curriculum.”

Sky Blue Window is new on the Indianapolis scene, but its inspiration goes back to 2007, when creator/founder Mike Knight handled the public relations for the Arts Council of Indianapolis. He noted then that while the arts went begging for funding—despite generating nearly $500 million in local economic impact, $52 million in tax revenue, and 15,000 full-time jobs—athletics always got the support it needed.

He wanted to change that.

At the same time, Knight won a regional Emmy for a video he made in conjunction with WFYI (Channel 20), the Indianapolis PBS station, about public art. He thought: What if you could do great stories about the arts and let people educate themselves?

That became the starting point for Sky Blue Window.

Over the next six years, Knight wrote and revised a business plan, found funding (from the Central Indiana Community Foundation), and figured out how to populate the website with relevant, entertaining content that fit his budget.

The answer was to get college students involved. That would satisfy not only the need for content but become a way to get young people educated and exploring and supporting the arts in Indianapolis. It also would give students opportunities to refine their writing, reporting and video production skills.

Since the site launched on March 11, students from Butler, Franklin College, the University of Indianapolis, and IUPUI have contributed stories.

On March 12, Knight received an email from the mother of one of the student-writers that said, “My daughter was so thrilled when this went live, and I’m sending you a note to say thank you for giving her this opportunity.”

Evelyn Schultz, a sophomore from Columbus, Ind., who’s in Butler’s JR333 class, said she “felt so accomplished to see my stories on the website.”

“Writing for a class is educational, but seeing my articles published and getting paid for my work was a true learning experience,” she said. “I’m truly grateful for the opportunity to write for Sky Blue Window.”

Reader reaction has been immediate too. Stories are getting passed around via Facebook and Twitter, with one—about the Independent Music and Arts Festival in Indianapolis—earning 98 “likes” its first day.

“If you look at larger media sites and their pages, 98 likes is really taking names,” Knight said. “From that perspective, we do really well.”

Sky Blue Window tries to add a new local story every day. During the summer, when student-writers have gone home, the website aggregates from local sources, including the alternative paper Nuvo and the eclectic website Punchnels.

Knight said he and editor Natalie Atwell, who oversees Sky Blue Window, are constantly tweaking the site to get people to spend more time there and learn more about the arts.

They’ve also begun to publicize the site and to secure sponsorships and additional funding.

“I want to grow the site,” Knight said, “to make it as meaningful as it needs to be.”