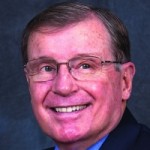 Created in 2001, the award recognizes individuals who have contributed significantly to the society’s goals and objectives. Pribush will deliver a keynote lecture during the ChemLuminary Award Ceremony at the spring 2014 ACS national meeting in Dallas.

Pribush says he was surprised and honored to be selected for the award. He normally shies away from recognition, he says, but this award is particularly meaningful to him.

“I serve ACS as a way of saying thank you for the opportunities that chemistry has given me to have a career that I thoroughly enjoy and by which I can help students realize their intellectual potential and the impact they can make in the lives of others,” he says.

Pribush’s involvement in ACS began in 1972, when he joined the then-Younger Chemists Committee Task Force. In 1978, he became the second chair of the newly formed Younger Chemist Committee. Over the years, Pribush has continued to serve ACS, including as councilor for the Indiana Section, program chair of the Central Regional Meeting, and Indiana Section organizer for the U.S. National Chemistry Olympiad.

Pribush “provides imagination that brings new, big ideas to an event and programmatic discussion. He cooperates fully with others and is never short in his personal commitment, and he takes responsibility for his part, completing tasks in reliable and creative ways,” says David J. Malik, a professor of chemistry at Indiana University-Purdue University Indianapolis, who has served as a councilor and vice chair for the ACS Society Committee on Education. “These are the qualities that make one’s volunteerism substantive and memorable.”