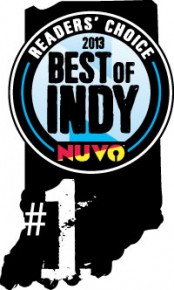 The poll was released in the July 24 edition of the weekly paper.

“Hard not to be impressed by Butler lately,” Nuvo wrote. “Its new Schrott Center for the Arts is a nifty, state-of-the-art theater that’s just the right size for productions that would’ve felt oversized by Clowes Hall. Its authors’ series continues to bring in some of the best and brightest across poetry and prose, some of whom end up stopping by the Efryomson Center for Creative Writing for an in-depth workshop or additional talk. And the Center for Urban Ecology is showing how public/academic partnerships can end up benefitting both students and the city at large. And while Brad Stevens may have departed, we’re pretty sure Butler basketball will remain competitive and nationally renowned.”

About Butler men’s basketball, Nuvo wrote: “The big news of the summer for the Butler Bulldogs is the departure of super-coach and ageless wonder Brad Stevens, who took an offer that simply couldn’t be refused and became head coach of the Boston Celtics. The university was quick to name his successor, 34-year-old assistant coach Brandon Miller, a 2003 graduate who played for the Bulldogs as a point guard in the pre-Stevens era. What all this means remains to be seen, but it’s hard not to feel good for Stevens and the university, after all, who would’ve thought a decade ago of a Butler coach moving directly to the bigs?”