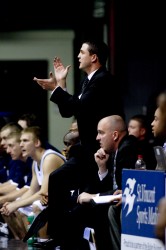 “I am confident that Brandon will carry on the Butler University basketball tradition of excellence, especially as we make the transition to the BIG EAST Athletic Conference.  As a player, assistant coach, and person, Brandon has exemplified the Butler Way and brings a blend of energy, talent, and integrity to this role. With Brandon’s leadership, Butler is well positioned to expand upon the success of the last few years. “

Miller returned to Butler in April as an assistant coach after five years away from his alma mater. He last worked at Butler during the 2007-2008 season, helping the Bulldogs to a 30-4 record, conference regular season and tournament championships, and a berth in the second round of the NCAA Tournament. Butler was ranked in the national top 25 for 20 weeks, reaching as high as No. 8.

Miller spent last season as a special assistant for University of Illinois’ head coach John Groce. With Miller on staff, the Fighting Illini recorded a 23-13 record and captured a spot in the NCAA Tournament Third Round. Last November, Butler faced Miller and the Illini in the championship game of the EA Sports Maui Invitational.

Prior to his one season at Illinois, Miller spent six years on the staff of head coach Thad Matta, a 1990 Butler graduate, at Ohio State. He served three years as an assistant coach, two seasons as director of basketball operations, and one year as video coordinator. During his tenure at Ohio State, the Buckeyes won four Big Ten titles, made three NCAA Tournament Sweet 16 appearances, and advanced to the 2007 NCAA championship game. He began his career as a video intern on Matta’s staff at Xavier in 2003-2004.

A native of New Castle, Ind., Miller was a top performer on Butler teams that compiled a three-year 77-20 record, three conference championships, and three trips to postseason tournament play. He arrived at Butler in 1999, transferring to Butler from Southwest Missouri State. After sitting out one season, he started 97 straight games and was just one of eight Butler players to record more than 1,000 points in just three seasons. He was the leading scorer on Butler’s 2002-2003 squad, helping the Bulldogs to a 27-6 record, a league championship, and a berth in the NCAA Sweet 16.

He finished his career ranked among Butler’s all-time leaders in points (1,121), 3-point field goals (189), and assists (305).  He earned All-Horizon League, Horizon League All-Defensive and Academic All-League recognition, and he was named Butler’s Co-Team MVP in 2003.  As a senior, Miller was chosen as Butler’s Co-Most Outstanding Male Athlete, and he received the Horizon League’s Cecil M. Coleman Medal of Honor, the league’s highest individual award.  He also was named recipient of the 2003 Chip Hilton Award, presented annually to a NCAA Division I senior who demonstrates outstanding leadership, character, integrity, sportsmanship, and talent. In 2006, he was named to the 15-player Butler Team of the Sesquicentennial.

Miller earned a bachelor’s degree from Butler in 2003.  He and his wife, Holly, have two sons, Mason and Michael.