The email came at an opportune time. Butler Associate Professor of English Chris Forhan had a number of poems written, but not enough for a full book. 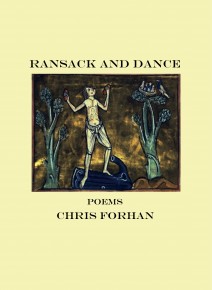 So when Melanie Villines of Los Angeles-based Silver Birch Press wrote to say she wanted to publish his work in a poetry chapbook—a short collection of thematically connected poems—Forhan was ready.

He went through what he had written and pulled together a group of 24 poems.

“Most of them were disillusioned, bitter love poems,” he said, “from my dark period of 7-10 years ago before I met my wife and had children and came to Indianapolis.”

The chapbook, Ransack and Dance, is now available on amazon.com.

“This is an odd time in my writing life,” Forhan said. In the past six years, he met and married Alessandra Lynch and they had two sons, Milo, 4, and Oliver 2. “The last four years have been mainly about chasing after them. To write poetry, I need a lot of solitude and silence. Uninterrupted time. I haven’t had that. It wouldn’t have crossed my mind to publish a chapbook, except Melanie asked to do it.”

The poems in Ransack and Dance start with disillusionment and end with grudging hope.

“Almost a happy ending,” Forhan said with a smile. “I hope in that title, there’s a pithy summary of the arc of the book. So it starts with ransacking and ends with dancing. It’s a movement toward a celebration of human connection, the possibility of meaningful love. But through the poems, there’s a grappling with animal desire and animal instinct—the desire that can create or destroy.”

This poem, “Nine Sentences About Her,” appears midway through the book:

to hear about it.

I feel a little iffy, I say, unballasted, she says Compared to what.

We sprawl among the sheets, I kiss her hair, I whisper happy

birthday, she says It’s a lot of people’s birthday.

she will appear in the movie version of my life

but otherwise forget it.

Play that song, she says, the one that makes me think of you thinking of

me thinking of  someone else.

mirror first and she is in it.

I ask are you listening to me, she says, Is it you who is speaking.

She plays the man for once, I the woman, and Bogie-like she grumbles

We had a laugh, kid, now buck up, you’re

poem about her and she says If I were you, I would end 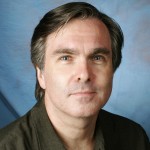 2013), and found some of his work in Garrison Keillor’s Good Poems, American Places (Penguin 2012). She contacted him about including his poem “The Church of the Backyard” in the Summer Anthology, and he offered several other poems for the collection.

That was the beginning of the dialogue that resulted in Ransack and Dance.

“Whenever I read Chris Forhan’s poetry,” Villines said, “I am awed by his mastery of language, originality of expression, depth of feeling, and dead-on insights. The single word that comes to mind is sublime. As soon as I finish reading one of his poems, I want to start over at the beginning. He is a writer that creates a sense of awe and wonder in me — and, really, what more can you ask from art or an artist?”

“I like the compactness of the chapbook,” he said. “Something you can do with a chapbook that isn’t as easy to do with a full-length book is to have that thematic unity. It all happens pretty quickly and then it’s over and done with. If I had 70-100 pages of love poems, it would probably be too much. But I hope 30 pages or so is a quick, intense experience.”