Butler Newsroom > Campus News > Astronomy Students and Faculty Get Another View of the Stars
Faculty, Student Awarded $100,000 in Grants for Innovation Projects Alpha Blackburn Joins JCA Board of Visitors

Astronomy Students and Faculty Get Another View of the Stars

Butler astronomy faculty and students, who already have remote access to telescopes in Chile and Arizona, will be able to view the stars from a telescope off the Canary Islands beginning in 2015. 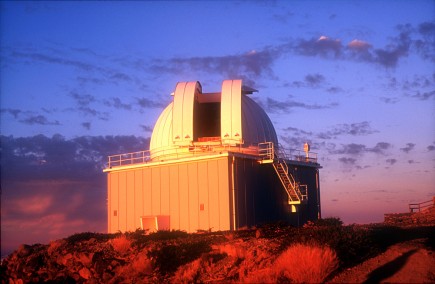 The Southeastern Association for Research in Astronomy (SARA), of which Butler is a member, will add the telescope located near the coast of Morocco once it is fitted for remote access.

“It’s one of the best sites in the world to observe from,” said Brian Murphy, professor of physics and astronomy. “The atmosphere is very stable there, which means your stars are almost pinpoint. And that’s an important aspect. Add the large aperture of the scope with the atmospheric stability and that leads to some very good data.”

The telescope, situated at an altitude of 2,360 meters at the Observatorio del Roque de los Muchachos, has sat idle since 2003. In late 2011, the Science and Technology Facilities Council of the United Kingdom announced the opportunity for interested parties to submit proposals to take over telescope operations.

Also, the Canary Islands site will be available year round to observe the Northern Hemisphere, while the Arizona facility shuts down for two months each summer during monsoon season.

Having remote access to telescopes on three different continents has paid dividends in scholarship, Murphy said. Five years into its partnership with SARA, Butler faculty and students have produced 35 publications in astronomy and astrophysics, with many of them listing students as first authors.

“So it’s been a success story for us,” he said.