A couple of decades before she would become Butler’s first sustainability coordinator, Mckenzie Beverage had already started obsessing about recycling. 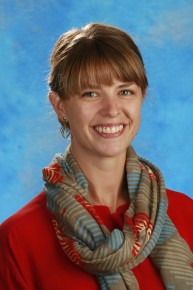 “I thought as a child: ‘Recycling is the way to be! That’s what we’re going to do to save the world!’” said Beverage, who started at Butler in early August. “My brother would intentionally throw his stuff into the trash. So I would run around on recycling night and go into his room and grab all the stuff before it could go into the trash. It was this constant battle.”

Her enthusiasm continued through high school, when she started reading about climate change, and through undergraduate and graduate school at Indiana University-Bloomington, where she focused on sustainable development and policy analysis and interned at the Office of Sustainability. There, her work included the annual Energy Challenge, an energy and water savings competition designed to instill conversation habits in the participants.

After graduation, she took a job at the University of Illinois as program advisor for the Student Sustainability Committee, which oversees more than $1 million in funding for green projects around campus.

And now at Butler, her goal is to make the University “as green as it can possibly be.” (Read more about Butler’s sustainability efforts here.)

“We are lucky to have someone as talented and dynamic as Mckenzie to be Butler’s first sustainability coordinator,” said Tim Carter, director of Butler’s Center for Urban Ecology. “I know she will have an immediate impact advancing the sustainability initiatives that have been started here at Butler.”

Beverage said she wants to build on the work student groups such as the Environmental Concerns Organization and the Student Government Association are doing and help Butler fulfill the American College & University Presidents’ Climate Commitment pledge to create a long-range plan to eliminate the campus’ net emissions of greenhouse gases.

Beverage said she would like to make the Athletic Department the greenest in the country, meaning everything from a more energy efficient Hinkle Fieldhouse to eliminating plastic water bottles from the concessions to running vehicles on alternative fuels.

“My job is to help the university become as environmentally friendly as possible,” she said. “Big dreams. We’ll do our best to get there.”