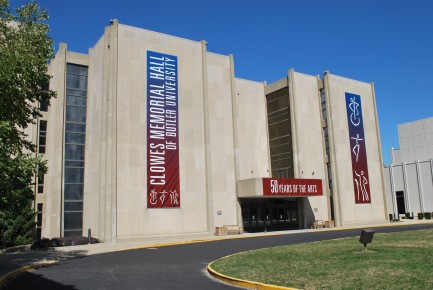 The grant comes on the heels of a $2 million gift from the foundation, which was used this summer to restore the inside of the hall. That work included adding all new seats and carpeting in the auditorium, acoustical enhancements, paint, and a new roof for the 2,200-seat hall, which celebrated its 50th anniversary on Oct. 18.

Clowes Hall, which opened on Oct. 18, 1963, was built in memory of the late Dr. George Henry Alexander Clowes, former research director for Eli Lilly and Company, and was the initial home of the Indianapolis Symphony Orchestra.

The idea of a multi-purpose hall to serve Indianapolis and the community as a center for all the entertaining arts was conceived by George Henry Alexander Clowes, who devoted his life to science and the arts. Funds to erect and complete the hall were subscribed by his family, with his wife, Edith Whitehill Clowes as the principal donor, Butler University, and a small circle of friends. Allen Whitehill Clowes was George and Edith’s son as well as a Butler trustee.

In 2009, the Allen Whitehill Clowes Charitable Foundation granted the hall $500,000 to complete a mechanical engineering infrastructure study that became part of a 10-year plan for the continued restoration and renovation needs of the building.