Butler University will confer an honorary degree on alumna Nadja Halilbegovich ’02 during the Dec. 22 winter commencement ceremony, recognizing her activism on behalf of children caught in the violence of war. 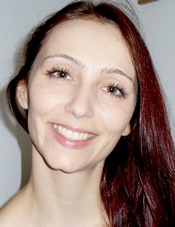 Halilbegovich is the first honorary degree recipient and the first external speaker invited to take part in a Butler Winter Commencement ceremony. Close to 150 degree candidates are expected to be honored during the event at Clowes Memorial Hall on the Butler campus.

Halilbegovich was 12 when war broke out in her native country, Bosnia. She kept a diary of her harrowing experiences over the next three years. The diary was later published, earning her recognition as the “Bosnian Anne Frank.”

After coming to the United States in 1995, she received a scholarship to Butler, where she earned bachelor’s degrees in theatre and music performance in 2002. As a public speaker, she has shared her experiences around the world at events such as The Global Young Leaders Conference and The State of the World Forum.

“Nadja Halilbegovich inspires audiences, especially young people, with her vivid accounts of living through war and her determination to offer peaceful solutions for interpersonal and world conflicts,” Butler President James M. Danko said. “Butler is proud to have helped her develop her compelling voice in such a worthy cause, and we look forward to honoring her.”

Professor of Religion Paul Valliere recalled hearing Halilbegovich speak at a public seminar in Indianapolis, while she was still a Butler student. “Nadja is a truly gifted speaker—poised, stylish, but also absolutely substantive,” he said.

Professor Emerita of Education Eugenia Scott said Halilbegovich “speaks from the heart and quickly touches the hearts of those in her audience with beautiful, meaningful, poetic phrasings. Her positive message, attitude, and sincere interest in all people can be felt through her words and beautiful smile. Nadja is an inspiration.”

Butler recognized Halilbegovich as the first-ever student recipient of a “Woman of Distinction Award.” After graduating, she embarked on a nine-month speaking tour with the non-profit organization Free the Children to promote peace and tolerance to more than 70,000 students across North America. She was profiled for her activism in Jackie Waldman’s Courage to Give book series, the Eric Walters book When Elephants Fight, and Michael Collopy’s Architects of Peace, along with the Dalai Lama and Mother Teresa.

Her first North American publication, My Childhood Under Fire: A Sarajevo Diary, was published in 2006. The Society of School Librarians International honored it as the best social studies book of the year. My Childhood was also nominated for the Norma Fleck Award and the Golden Oak Award. It was translated into French in 2007 and Indonesian in 2009.

Halilbegovich now lives in Canada and maintains the website www.nadjapeace.com.