Catherine Pangan’s mind reeled when she learned that her 3-year-old son Hudson had a life-threatening peanut allergy. How could she keep her little boy safe without making all foods seem scary? 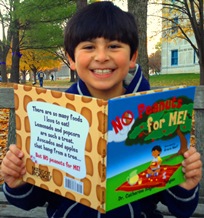 Hudson Pang with the book he inspired, NO Peanuts for ME!

The College of Education professor sat down at a computer with Hudson in her lap, and together they wrote a short story celebrating the many good foods and good times Hudson could still enjoy.

The story’s refrain “… but NO Peanuts for ME!” became a book title, when Mascot Books published Pangan’s work this fall.

She and Hudson, now 8, will sign copies of NO Peanuts for ME! in the Butler bookstore on Thursday, December 5, from 4:30-6:30 p.m. The bookstore will offer a coupon that day, for a 20 percent discount on the book’s $14.95 price. NO Peanuts can also be ordered through Amazon.com and Barnesandnoble.com.

Indianapolis artist Gracie Warf illustrated the book, with input from Hudson. Warf’s drawings show a dark-haired Hudson on adventures with a tiny mouse companion, representing his real-life little sister Violet, and other special people in his life. He has watermelon at the beach with his grandma and sardines with his grandfather, but leaves the peanuts for elephants and monkeys in the zoo.

When Hudson showed the published story to his third grade classmates, they loved the fact that Hudson was the main character.

“His friends thought it was cool that he had his own story,” Pangan said. “It’s neat for young kids to see other kids taking charge of their own situations like this. It’s different from an adult telling them about something.”

At a very young age, Hudson has had the confidence to advocate for himself and explain his allergy to others, just as the book’s main character does, she said. “From the age of 3, he knew about allergies and antibodies.”

In the book’s foreword, Pangan suggests that young readers share NO Peanuts for ME! as a way to start conversations about their food allergies. The book is geared toward readers ages 2-6, but older siblings and parents can also read and pass on its lessons, she said.

An assistant professor in the College of Education’s Middle and Secondary program, Pangan held the College’s Richard Guyer Professor in Education endowed chair from 2010-2013. She received a creative activity stipend as Guyer Chair and used part of those funds to publish NO Peanuts for ME!

She is an author of a quarterly column in The New Teacher Advocate and has written curriculum for the Children’s Museum of Indianapolis.

Mascot Books also published He Huffed and He Puffed But … A Tale of a Wolf with Asthma (2013) and Pharmacy and Me (2012). Teams of Butler students representing education, pharmacy, and other majors wrote and illustrated those books as capstone projects.