Professor McGrath Offers a Scholarly Take On ‘Religion and Doctor Who’

Take TV viewers on trips through time and space for 50 years and you’re going to pick up some admirers—including some scholarly ones. That’s what’s happened with Doctor Who, the British series that is celebrating 50 years this month. 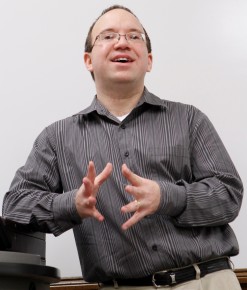 Two of the show’s fans—Butler University Professor of Religion James McGrath and Andrew Crome, a lecturer in the history of modern Christianity at the University of Manchester (England)—have compiled a new book, Time and Relative Dimensions in Faith: Religion and Doctor Who, in which 19 scholars who also are Doctor Who fans weigh in on how the longest-running science fiction series in television history deals with religious topics.

“The very fact that something could be going this long makes it worth studying,” McGrath said. “The 50th anniversary seemed to be as good a time as any to put together a book like this.”

Chapters in the book include “There Never Was a Golden Age: Doctor Who and the Apocalypse,” “The Monstrous and the Divine in Doctor Who: The Role of Christian Imagery in Russell T. Davies’s Doctor Who Revival,” and “The Church Militant? The Church of England, Humanity and the Future in Doctor Who.”

“Basically, all the different ways science fiction could do something with religion, Doctor Who has,” McGrath said—including traveling back to the Crusades and France in the late 16th century during unrest between Catholics and Protestants. “The show visits various time periods in human history—and religion is a facet of human history, so it gets explored in interesting ways and gives us a chance to reflect on things like what history looks like to us now.”

The Doctor Who story, according to the show’s Facebook page, is this: The Doctor is an alien, the last of the powerful Time Lords. He travels through time and space, armed with incredible intelligence and his fix-anything sonic screwdriver. He travels alone except for the human companions he befriends, briefly sharing his life with them and showing them the astonishing wonders of the universe. He is a protector of mankind, and his mission is to save the planet from frequent and varied alien attacks.

“The Doctor’s eloquent words about the beauty and extent of the cosmos, about the value of human life, about the need to be true to our chosen identity, illustrate the reason the show is important to so many fans, and of natural interest for those who study religion,” McGrath wrote in the book’s epilogue.

The idea for the book came at an American Academy of Religion Conference, shortly after McGrath presented a paper on how religious themes are presented on the show. After his presentation, Crome suggested they work together on a book.

They put out a call for submissions and got more than double the number of proposals they needed.

“It meant we could say, ‘OK, we’re going to take them not just on the strength of the proposal alone, but also make sure that we cover various angles,’” McGrath said. “A lot of themes and approaches were used.”

McGrath remembers first seeing Doctor Who as a child during a family vacation. He was more transfixed by the aliens and space travel than religion back then, but the show hooked him. In the years since, he’s done his best to see as many episodes as possible.

These are five favorites that deal with overtly religious themes:

-“Four to Doomsday” (1982), the first episode he ever saw—The Doctor meets Monarch, ruler of Urbanka, who believes that if he can move his ship faster than the speed of light, he can pilot it back to the beginning of time and discover himself as God.

-“The Daemons” (1971)—As archaeologists excavate a Bronze Age burial mound, a local white witch arrives to protest, warning of great evil and the coming of the horned beast, but she is dismissed as a crank. The Doctor decides she is right—the dig must be stopped, so he travels there.

-“The God Complex” (2011)—The Doctor has to undermine one of his traveling companion’s faith in him to save her from a creature that feeds off the faith of people.

-“The Improbable Planet/The Satan Pit” (2006)—A double episode in which the Doctor’s ship lands on a planet with an ancient beast that has begun to awaken. The Doctor must save the universe.

-“The Massacre of St. Bartholomew’s Eve” (1966)—The Doctor travels to 1572 Paris, France, where tensions between Protestants and Catholics are boiling over.