Johanna Marvin ’08 received some unexpected but wonderful news on November 20: She was selected as the recipient of the Indiana Music Education Association (IMEA)’s Outstanding Middle School Music Educator Award. 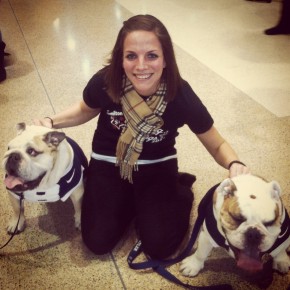 The award typically goes to teachers with 10 or more years of experience. Marvin is about halfway through her sixth year as Director of Orchestras for Riverside Junior High and Riverside Intermediate School in the Hamilton Southeastern School District based in Fishers, Ind.

“I never, ever expected anything like this this soon, if ever,” she said. “I think I have the best job in the world, so being recognized for that feels almost silly. But it’s an honor to be recognized among so many amazing music teachers.”

Marvin will be recognized at the IMEA’s convention in January in Fort Wayne.

While not quite a “born teacher,” Marvin has wanted to teach since age 14, inspired by the teachers and coaches she had growing up in Bethlehem, N.Y. She credits her high school orchestra director, piano and cello teachers, choir teacher, and track coach in particular.

Marvin chose Butler because it had everything she wanted – the right size, the campus, the opportunities, the cello professor (William Grubb). Perhaps most importantly, it accommodated her desire to be able to study music education and run track.

Every other university I spoke to said, ‘There’s no way you can do music education,’” she said. “‘We don’t have musicians who are athletes. It just doesn’t work. The schedule doesn’t work.’”

Butler made it work.

“I feel I was very well prepared at Butler,” she said. “But also, I have a bit of a natural calling to be a teacher. I always knew I wanted to be a teacher, so I come across it easier. I do well with junior high. I think I have a good personality and attitude to teach that age level, and I think that resonates with students and apparently it shows to parents, other teachers, and members of the community.”

Ben Yoder, an orchestra and music teacher at Hamilton Southeastern Junior High School, nominated Marvin for the award. He said that from reading letters of support from Marvin’s principal, parents of students, Indianapolis Symphony members, and her students themselves, it’s clear “that she is truly making a difference in the lives of kids.”

“She is a music teacher who truly works to inspire her students to be great musicians,” he said. “As one of her teaching colleagues, she inspires me every time I get to watch her teach.”

In her job, Marvin is responsible for sixth- through eighth-grade orchestras—more than 200 students, which is more than double the number she started with six years ago. In an average day, she works with 115 students in four junior high orchestras (her seventh- and eighth-graders), teaches a music-appreciation class, and ends the afternoon with her beginning string players.

This year, she has 96 beginners.

The week before Thanksgiving, she brought together the beginning violins, violas, cellos, and basses for the first time this year.

“I was standing on a table and probably shouting at the top of my lungs, but when they start playing, it’s the coolest, most rewarding feeling to watch these 90-some-odd children,” she said. “It’s amazing.”