The Jordan College of the Arts has named Professor of Music Eric Stark to the position of Director of Choral Activities effective January 1, 2014. 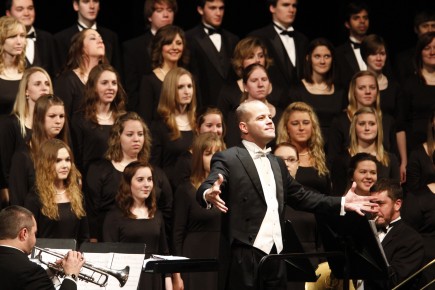 He officially takes on the role in January, overseeing administration, planning, and strategy for the four choral groups that are faculty-led: the Butler Chorale; University Choir; Chamber Choir; and Jordan Jazz.

Stark, who started teaching at Butler in 1996, takes over for the man who helped get him hired at Butler, Henry Leck. Leck retired at the end of the 2012-2013 school year after 27 years at Butler.

“I am delighted that Eric has agreed to serve as the Director of Choral activities upon Professor Leck’s retirement,” said Daniel Bolin, chair of the Butler University School of Music. “I am confident that he will provide excellent leadership to our choral program and will provide many outreach opportunities for area high schools.”

“I feel incredibly blessed to have wonderful colleagues at Butler,” Stark said. “To work so close with Henry has been one of the great blessings of my life.”

Stark has two early orders of business. The first is to find an Associate Director of Choral Activities to assist him in conducting and recruiting. The position has been advertised and the candidate will be hired by the end of the current school year.

The second is the creation of an all-female choir that will begin in fall 2014. Stark said the plan is to move University Choir rehearsals from 12:30 Mondays, Wednesdays, and Fridays—which is a difficult time for non-music majors—to early evenings. The women’s choir will meet in the midday timeslot.

“There’s a good pedagogical basis for this,” Stark said. “If you have a freshman choir with 50 women and 18 guys, you’re always telling the women to hold it down a little bit. That’s fine from time to time, but as an everyday thing, it’s not good for them because they get the message that how I sing is not valuable or necessary to the ensemble. But that’s what the conductor has to say if you can’t hear the guys.”

A women’s chorus, meanwhile, “can fully explore their vocal abilities and we can do repertoire for them that is challenging rather than having to pick relatively easy rep that oftentimes less experienced men need,” he said. “It’ll allow them to excel at a quicker rate than they do when we only offer mixed choirs.”

Stark grew up in Columbus, Ind., and was inspired by the music at First Presbyterian Church. He sang in the church choir for 12 years and took piano and organ lessons from the choir director. He earned his bachelor’s from Wabash College and both his master’s and doctorate in choral conducting from Indiana University.

Stark commuted from Indianapolis to Bloomington while working on his doctorate and used to sneak into the practice rooms at Butler’s Lilly Hall to do homework.

“I thought it would be so wonderful to get a job at Butler,” he said.

When a job came open, Leck got him in to see then-Dean Michael Sells, who hired Stark on a one-year, part-time contract. That turned into a one-year appointment, and then a full-time hiring. In the interim, Stark also taught at Earlham College in Richmond, Indiana University Purdue University Fort Wayne, and Christian Theological Seminary.

In addition to teaching at Butler, Stark is director of the Indianapolis Symphonic Choir.

“I’ve always felt so fortunate that my two professional worlds reside so closely together,” he said. “This new position gives me more opportunity to guide that relationship and finds ways to mutually benefit both groups.”