Donors from across the country honored Bobby Plump, the hero of the 1954 “Milan Miracle,” on January 26 by announcing a joint $50,000 gift in his name to Butler’s Campaign for Hinkle Fieldhouse. 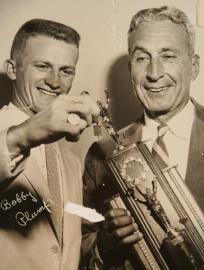 Butler President James M. Danko and Hoosiers screenwriter and producer Angelo Pizzo were on hand for the gift presentation in Hinkle, along with Plump’s family, former Indiana Pacers coach Bob “Slick” Leonard, and Maris Valainis, the actor who played Jimmy Chitwood, the character in Hoosiers inspired by Plump.

In recognition of the gift, the southwest concourse ramp of the fieldhouse will be named for Plump, who played for the Bulldogs and Coach Tony Hinkle from 1954–1958.

Last Saturday, January 18, the University announced that The Hinkle Campaign raised $17.1 million to fund preservation of the 86-year-old national landmark and improvements to its facilities for student athletes and fans. Contributions to the Campaign for Hinkle Fieldhouse can still be made at www.hinklecampaign.com.

Work on the Plump gift was initiated by Tom Kohlmeier, who grew up in Milan hearing how Plump sank the final shot that turned tiny Milan High School—with just 161 students— into the Indiana state high school basketball champions and the legend that inspired “Hoosiers.”

Kohlmeier was only 3 years old when the “Milan Miracle” happened, but he became a fan of the championship team members, especially Plump, whom Kohlmeier’s father drove to radio and TV interviews following the championship.

Plump went on to set more longstanding basketball records at Butler; the University inducted him into its Athletic Hall of Fame for basketball and baseball in 1994. Sports Illustrated named Plump among the 50 greatest sports figures from Indiana in the 20th century. 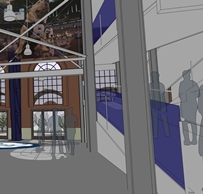 Rendering of Hinkle Fieldhouse ramp to be named in Plump’s honor.

Kohlmeier said he and the dozen other donors liked the idea of placing Plump’s name “in the public eye,” on the concourse ramp used by so many spectators. The variety of donors who gave to Butler to honor Plump testifies to his sports icon status. Gifts came from the Indiana Basketball Hall of Fame and 12 individuals, living in Indiana, Arizona, North Carolina, Texas, and Maine. The donors represent a wide age range—from 34 to 84.

“Several donors do not know Mr. Plump; they only know of him and the Milan story,” Butler Advancement officer Graham Honaker said. “Three-quarters of the funding came from first-time donors to Butler.”

All the donors are impressed by what Bobby Plump represents, Kohlmeier said. “They wanted to be a part of it.”

Sixty years after his famous last shot, Plump still gets requests for autographs and photos when in public, and graciously complies. But his friend for more than four decades remains “a very humble man,” Kohlmeier said.

“Bobby’s never taken his fame or celebrity role very seriously,” he said. “He understands that people yearn to be able to reach out and touch someone who’s famous. His self-deprecating humor keeps people at ease.”

Plump has used his fame to promote causes for Butler and the town of Milan, including a new museum in Milan, which commemorates the 1954 championship team.

Plump also likes sharing his belief “in the good of sports” for young people, Kohlmeier said, a lesson learned from Milan Coach Marvin Wood and from Tony Hinkle, two of his mentors.

“I’ve had a love of Hinkle Fieldhouse all my life, going back to when Indiana had single class basketball, and high schools in the state had the opportunity to come to Hinkle to watch the semi-state and final four games,” he said. “This gift is something to honor Bobby, Butler, and the town of Milan.”