The Martha Graham Dance Company will be in residency at Clowes Memorial Hall of Butler University beginning Tuesday, February 4, performing many educational events for both students and the general public in advance of its performance on Friday, February 7. 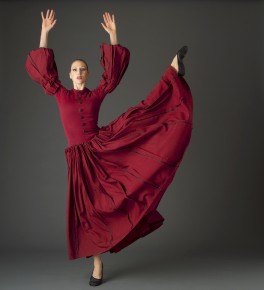 During that time, the company will provide educational workshops with the Indiana School for the Blind and Visually Impaired, Kaleidoscope Youth Center, Heritage Place Senior Citizen Center, and Butler University.

There will be a free public Clowes Conversation on February  5 at 6:00 p.m. with Dance Kaleidoscope Artistic Director David Hochoy, who is a former Martha Graham Dance Company member, as well as current members of the company. The topics discussed will range from the life of Martha Graham to what life as a dancer is like. Admission is free, but a ticket is required. Tickets are available in person at the Clowes Hall Box Office or online at Ticketmaster. Ticketmaster fees apply.

The performance on Friday, February 7, at 8:00 p.m. will feature Graham’s masterpiece “Appalachian Spring,” “Clytemnestra,” and “Maple Leaf Rag.” A pre-performance discussion with David Hochoy and Butler Associate Professor of Dance Susan McGuire will take place at 7:15 p.m. in the Krannert Room of Clowes and is free with your ticket to the evening performance.

Tickets for the Friday performance start at $25 and are available now at the Clowes Hall Box Office and Ticketmaster. Student and senior discounts are available. More information can be found at www.cloweshall.org.

The Martha Graham Dance Company has been a leader in the development of contemporary dance since its founding in 1926. Informed by the expansive vision of pioneering choreographer Martha Graham, the Company brings to life a timeless and uniquely American style of dance that has influenced generations of artists and continues to captivate audiences.

Graham and her Company have expanded contemporary dance’s vocabulary of movement and forever altered the scope of the art form by rooting works in contemporary social, political, psychological, and sexual contexts, deepening their impact and resonance. Always a fertile ground for experimentation, Martha Graham Dance Company has been an unparalleled resource in nurturing many of the leading choreographers and dancers of the 20th and 21st centuries, including Merce Cunningham, Erick Hawkins, Pearl Lang, Pascal Rioult, and Paul Taylor.