Salmon: You know its names—king, keta, pink, coho, sockeye, masu and Atlantic—and probably not much more.

Nic Mink wants to change that. 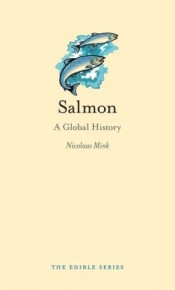 In his new book, Salmon: A Global History (Reaktion Books), Butler University’s Urban Sustainable Food Fellow traces the fish as it evolved from a relative culinary rarity into a phenomenon of mass production, marketing, and processing. (More information is available here.)

“The book tries to look at and link salmon production and consumption through the mediating experience of technology and preservation,” Mink said.

Mink’s interest in salmon—and the research for his book—began about five years ago, when he moved to Alaska. He did community advocacy and outreach for small boat fishermen there and also started a community-supported fishery called Sitka Salmon Shares that ships Alaska-caught salmon to consumers while paying the fishermen a fair wage. (He still operates the business at sitkasalmonshares.com.)

In Mink’s book, Sitka serves as the epicenter of global salmon history. He traces salmon fishing there back 3,000 years and also details the community’s recent history. The fresh market in Alaskan salmon began there in the 1980s, he said. Sitka was home to one of the first commercial fisheries on the Pacific Coast and the second cannery.

Mink said the biggest change in the salmon world occurred from 1981-1985 when salmon farming began in earnest in open water net pens in the north Atlantic Ocean. In that environment, fish bred and grew faster while requiring less feed. With more salmon available, consumption went from a few dozen metric tons to millions, and fresh fish markets began springing up everywhere. The Pacific Ocean became the domain of wild salmon; the Atlantic home for farmed salmon.

Along with tracing the lineage of salmon, Mink also gets into how the history and biology of the fish affects its taste. He even provides recipes.

Mink said his approach to the book was influenced by Butler alumnus Mark Kurlansky ’70, who wrote the bestseller Cod: A Biography of the Fish That Changed the World.

“His book helped me develop my thinking,” Mink said. “It’s one of those benchmark pieces of food history in the modern era. He did such a remarkable job linking geopolitical change, culinary change, and conservation, and he raised a bunch of issues about food that I don’t think people had thought about.”