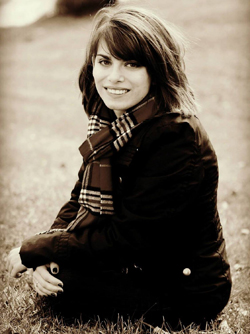 Lights out! Curtain up! Introducing Grace Ingraham—Butler theatre major and dramaturge for the Indianapolis Phoenix Theatre production of Tribes.

Tribes by Nina Raines, tells the story of a family with three children, one of whom is a deaf son raised without knowledge of sign language. When he meets Sylvia—a hearing woman born to deaf parents who is now slowly going deaf herself—his interaction with her, including her teaching him sign language, reveals some of the beliefs and hierarchies of the family and the “extended family” of the deaf community. Grace explained that the emphasis of the play is about families, about being a tribe; being a unit. The play explores how the young man’s discovery of the deaf world and how society interacts with the deaf upsets the status quo of his own family.

As the dramaturge for Tribes, her senior project, Grace was responsible for becoming the resident advisor on the environments in which the action takes place as well as the psychological underpinnings of the characters.  As an individual who is hard of hearing, this was a challenge that Grace embraced with enthusiasm and insight.  Grace shared that others cannot really understand the experience of having a disability unless they have experienced having one.  Grace explained, “My job was to help the actors understand that experience.”

Grace, who has had a hearing impairment since birth, explained that without her hearing aids sound is quiet and muted. Even with her hearing aids, Grace is not always able to hear the higher frequencies like some women’s voices, for example. Grace remembered that transitioning to Butler was a difficult challenge for her. Grace recalls, “Unlike high school, I wasn’t always able to hear properly in my classes leaving me disoriented and wondering how I would be able to keep up.” Grace said using an assistive listening device in most of her classes made a big difference. Grace shared, “All my professors were very amicable about wearing the speaker’s microphone and have been incredibly helpful and accommodating.”

Several months before opening night, Grace began her work on Tribes by reading the script, completing a play analysis, and researching resources and information to share with the actors. Next, she met with the producers and director and then finally began working with the actors. All the actors have hearing, so in addition to working with Grace, the lead actors—particularly Andrew Martin who plays Billy, the deaf son—worked with a Purdue expert on deaf studies to make sure they sounded deaf but were able to be understood by the audience. Grace said seeing the care taken by the actors to accurately portray the heartache and the joys of individuals who are deaf and hearing impaired was both amazing and gratifying.

Grace shared that working on the production of Tribes helped her learn a good deal about herself as a hearing impaired individual. Grace said it was sometimes hard not to show emotion when talking with the actors, but she was proud of her work and of her contribution to the production. “I am proud to be who I am. This is my normal even with the ups and downs,” she said. Grace added that her experience as a dramaturge for Tribes has reinforced that having a hearing impairment is what makes her unique and is what has given her the drive to achieve and to prove that she is capable and able.