Thanks to a $30,000 grant from the Butler Innovation Fund, students in the Chemistry Department have partnered with the Center for Urban Ecology (CUE) to convert waste cooking oil into biodiesel fuel. 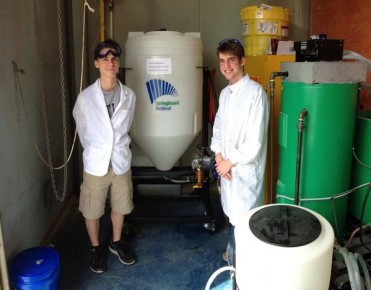 This student-led initiative seeks to recycle vegetable oil waste from the Marketplace at Atherton Union and convert the oil to biodiesel fuel that can be burned by various vehicles and equipment currently utilized by the Facilities Department.

At the Butler conversion facility, approximately 50 gallons of vegetable oil will yield a range of 40-45 gallons of biodiesel.

“First and foremost, the initiative aids the University’s mission to reduce its carbon footprint because the fuel will be implemented into the campus fleet,” said Kyle Graden, biodiesel intern at the Center for Urban Ecology and one of eight student leaders involved in this project.

Other than the obvious sustainability component, according to Graden, the biodiesel initiative benefits the Butler community in areas such as knowledge sharing and cross-campus collaboration. It also saves the campus money on diesel fuel purchases and helps the community to “think locally.”

The initiative’s initial stages began last November, as students involved in this project made it their goal to reduce Butler’s contribution to air pollution.

Many of the preliminary efforts made by the group were spent determining the proper way to work the machinery. Students also wrote safety protocol documents, an instruction manual, and contacted the American Society for Testing and Materials (ASTM) to become certified to produce the fuel.

After producing an initial 50-gallon test batch in December, the students have created one additional batch of biodiesel thus far. The resulting biodiesel is then blended with actual diesel fuel for use in the campus vehicles.

In the short term, the biodiesel team hopes to establish a regular schedule for fuel production. The majority of its efforts will be focused on using the processing equipment to manufacture the fuel for the Facilities Department.

A long-term goal for the initiative, pending legal approval, is to sell excess supply of the biodiesel to local businesses and the Indianapolis community at a competitive price.

According to McKenzie Beverage, Butler’s Sustainability Coordinator, the University is a national leader among universities in terms of biodiesel production. Butler is the first higher education institution in Indiana—and one of only a handful in the United States—to take on a student-driven alternative fuel initiative.

“Projects like this are very beneficial for college campuses to partake in for a number of reasons,” said Graden. “The project is student run, which allows participants to combine concern for the environment with an economically efficient model.

“Initiatives similar to this bring together different areas of a university to promote sustainability and provide an excellent learning opportunity, allowing students to become leaders.”

The biodiesel interns will be offering tours of their production facility on Earth Day, April 22. Those interested can sign up via this link: https://docs.google.com/forms/d/1SXgJakv8o1f5-A0nFhrsViRAwcmLNhibegjCvk9WyAM/viewform.

For more information about the initiative, the students involved in the project run a blog, as well as Facebook and Twitter accounts.