Butler junior Rachel Chambers made the long-distance call of a lifetime Tuesday, April 29—a video conference with astronauts aboard the International Space Station. 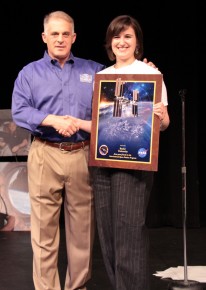 The call took place at The Children’s Museum of Indianapolis, where Chambers and 19 students from Indianapolis middle and elementary schools spoke with Expedition 39 flight engineers Rick Mastracchio, Steve Swanson, and Koichi Wakata as they orbited the Earth at 5 miles per second.

While the students interviewed the astronauts, they and about 500 of their classmates watched the large video screen on which the astronauts—dressed in green polo shirts and khaki pants rather than spacesuits and letting a microphone float from man to man—could be seen answering the questions.

“It was one of the most wonderful experiences I’ve had in my life so far, especially educationally,” said Chambers, a Toledo, Ohio, native who plans to teach elementary school after graduation. “It was so cool to be up there, especially with the kids, and see their excitement, their enthusiasm, and have that chance to actually talk with astronauts live in space.”

Most of the kids’ questions had to do with things like how the men became astronauts, what kind of foods the astronauts eat in space (pretty much what we eat on Earth, though Wakata said he wished sushi were an option), and how they go to the bathroom in space (fun fact: The oxygen in urine gets reused.)

Chambers asked the astronauts about their greatest experience in space. Mastracchio said his was taking a walk in space and seeing a panoramic view of the Earth.

“It’s something I’m going to remember for the rest of my life,” he said. 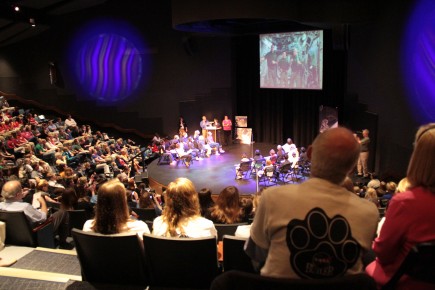 The event was part of Destination Station, NASA’s national awareness campaign to educate the public about space station activities.

Pangan said Butler got involved at the request of The Children’s Museum. Her class does work at the museum throughout the semester, in addition to working with students in the Lab School. To prepare the Lab School students, Pangan’s class spent a class period teaching them about who the astronauts are, what the International Space Station is, and the background of the space program.

The project so excited the Butler students that the mother of one, Mallory Russikoff, made T-shirts with Butler and NASA logos for the class to wear. Pangan was ecstatic, too.

“I had goose bumps almost the whole time,” Pangan said. “Every week our class has done something incredible. This was just icing on the cake.”