John Perkins, who has taught music at the American University of Sharjah in the United Arab Emirates since 2008, will join Butler University as Associate Director of Choral Activities and Assistant Professor of Music. 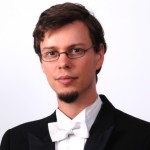 His assignment at Butler will include conducting the Butler University Choir (which now moves to an evening rehearsal time to accommodate more non-music majors) and the newly created Butler Women’s Choir.

Perkins’s wide-ranging experience includes founding and serving as artistic director of the Nassim Al Saba Choir, the first Arabic, four-part choir in the Arabian Gulf devoted to Arabic choral music. He has conducted the choir in places as diverse as Carnegie Hall and Indonesia.

In an article on academia.edu, called “Engaging with Arab Choral Music,” Perkins wrote: “I believe in the power of Arabic choral music as a vehicle for a community-building dialogue between Arabs and non-Arabs, especially in the West. This dialogue exists on a daily basis in my interaction with both students and faculty, and has precedence in other realms of life.”

“Having established and strengthened choral programs in the United States and abroad, John possesses that rare combination of consummate musicianship, infectious energy, and dynamic leadership that will help propel Butler’s choral program for years to come,” Stark said. “I look forward to welcoming John and his family to Indianapolis, and working together with our fellow members of the Butler community.”