Butler senior guitar major Josh Turner was home Monday, doing the dishes, when he received a call from a New York area code. The caller left a message: Would you be interested in being on Good Morning America? 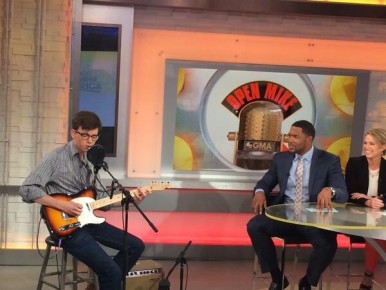 Turner appeared on national TV live from New York at 7:48 a.m. Thursday, part of a segment called “Open Mike” that devotes airtime to talent found online. The show labeled him an “online sensation,” thanks to his version of Paul Simon’s song “Graceland” on YouTube. Co-host Michael Strahan said Turner’s version “sounds just like the original” and challenged Turner by playing parts of the original, stopping it, and having him pick up where Simon left off.

He handled the assignment with ease, as you can see here.

“I was incredibly stunned when they called,” Turner, whose video had come to the show’s attention through a post on the website Reddit, said Wednesday. “I never really interact with Reddit directly, but sometimes people who watch my videos post them to Reddit, where they’re seen by a lot more people. Somebody from the show must have seen it there.”

For a low-key performer who hopes one day to be a session musician—or maybe a sideman for a singer-songwriter—it was an extraordinary opportunity to be the front man for a day.

Turner, who was born in Indianapolis and lived in Cincinnati and North Carolina before coming to Butler, said music’s been part of his life since age 7 or 8 when he started playing piano. He’s been in choirs since age 9 (at Butler, he’s in the Butler Chorale and is musical director of the a cappella group Out of the Dawg House) and started playing guitar at 13.

In high school, he played guitar and some banjo in a three-piece bluegrass outfit called The Other Favorites, and he’s in a folk group now called Coyote Armada that’s made up mostly of recent Butler graduates.

Turner’s parents had lived in the Butler-Tarkington neighborhood and when he was looking at colleges, they knew he was looking for a mid-sized liberal arts school.

“I wound up looking at Butler and really liking it,” he said.

Turner said he had “no idea” what he hopes will come from Thursday’s appearance on national TV.

“I don’t know that I’ve fully addressed it mentally,” he said. “I’m sure it will lead to a bump in views and hopefully more opportunities down the road, but I’m not hoping this is going to launch my career. But it’ll be great to have more people aware of my music and seeing what I’m up to on YouTube.”

Incredibly, GMA was not his only offer. A few days before, he’d gotten a call from The Ellen DeGeneres Show. They’d also seen the “Graceland” video and were interested in having him on. But they couldn’t give a firm date, so they suggested he take the Good Morning America offer.

“I would have been stunned for one offer alone,” he said. “To get the two in the space of about four days is completely unprecedented.”