The Illustrated History of Butler University

Picture this: the illustrated history of Butler University. The campuses, the buildings, the people who made the history. The clothes, the activities, the classes, the games. 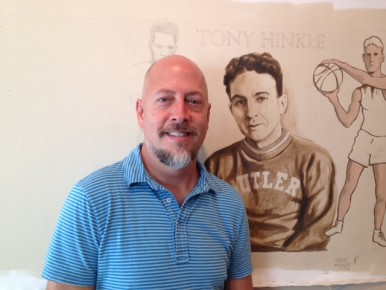 Artist Jon Edwards, and his drawing of Tony Hinkle.

That’s what Indianapolis artist Jon Edwards has been drawing for the better part of a year. And when the Hinkle Fieldhouse renovations are complete in October, his work—which he’s drawn across 10 canvases that are 28 inches high and a total of 120 feet in length—will cover the walls of the newly remodeled Wildman Room.

“I went through the Drift one by one by one and looked at page after page and picked out what I thought would be interesting to look at,” Edwards said, standing a couple of miles east of campus at Blice Edwards studio, the business he and partner Chris Blice founded in 1993. “They didn’t want to just focus on sports. They wanted to focus on campus life. So I wanted to pull all kinds of material.”

He did. Starting with a picture of the proposed home of North Western Christian University (only a portion of which was built), Edwards’s illustrations capture the eras and the major moments. Everything is labeled, so that everyone looking at the murals will know what they’re looking at, even if they don’t know Ovid Butler from Tony Hinkle.

Butler and Hinkle are both represented, of course, as are boldfaced Butler names like Catherine Merrill and Arthur Jordan. The University’s moves to Irvington in 1875 and Fairview in 1928 are illustrated. There’s a cartoon from 1923 showing the University as a young man leaving home with a young woman labeled “Fairview.” His mom—representing the Irvington campus—says, “Well my boy, if you’re determined to leave the old home, I’m glad you picked such a nice girl.” (All the original artists will be credited by name, “because I hope somebody does that for me someday,” Edwards said.) 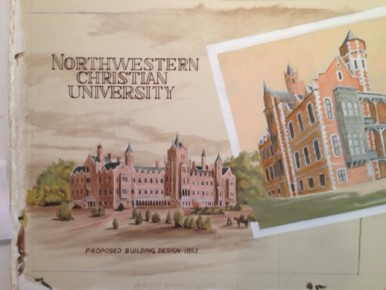 The construction of Jordan Hall and Hinkle Fieldhouse are depicted. So is Butler’s awareness of the rights of women and minorities, which is shown in a picture from 1913 featuring a black graduate. And of course basketball and football get plenty of attention.

When Blice Edwards did the mural in the Johnson Boardroom in Robertson Hall, they painted directly on the walls. For the Wildman Room, the technique Edwards is using is called marouflage, which means painted on canvas and hung on the wall. When the murals are done, he and others will coat the walls in the room with wallpaper glue and unroll the canvases.

Edwards said he hopes people who see his work “will be enlightened in Butler history and learn a little bit about the lives and the stories of those people who made Butler University what it is today.”