Butler Newsroom > Butler Home Page > Officer Davis: ‘A Hero Who Made the Ultimate Sacrifice’
Butler Hires Real Estate Consultants to Find Retail Tenants for Parking Facility For All the Dogs We’ve Loved Before, A Memorial

Officer Davis: ‘A Hero Who Made the Ultimate Sacrifice’

Butler University Police Officer James Davis, who was killed in the line of duty on September 24, 2004, was remembered on the 10th anniversary of his death as “a professional, friendly, and caring individual” and “a hero who made the ultimate sacrifice for this campus, the Butler-Tarkington neighborhood, and the city of Indianapolis.” 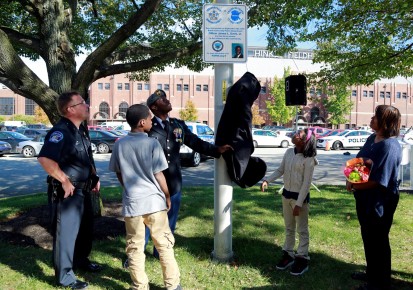 Assistant Chief Andrew Ryan and the family of Officer James Davis, at the unveiling of the sign remembering Davis outside Hinkle Fieldhouse

“If there is anything we can do to show our continued thanks for James, it is to make sure we never forget him,” Assistant Police Chief Andrew Ryan told an audience of about 75 that included Davis’s widow, Veleda; their children Josiah, Jarren, and Jaedyn; Veleda Davis’s parents; police officers; administrators; and others outside Hinkle Fieldhouse, where Davis was killed.

To remember Davis, a sign was unveiled in his honor as part of the Fallen Officers Legacy Project, which memorializes officers killed in the line of duty. In addition, the Holcomb Carillon bells chimed 10 times in recognition of the 10th anniversary.

“I know from his reputation that he was a courageous and kind police officer,” Danko said. “And, I know, from looking at his family members here today, that he was a loving husband and father.”

Josiah Davis, who was 8 at the time of his father’s death and is now a high school senior, said his father was an “optimistic, caring, and strong person,” who loved being a police officer. Josiah thanked the Butler community for being there for him and his family.

“It was a little hard for me to cope with the death of my father,” he said, “but the Butler University community took us all in. They gave me math tutoring, and, whenever I or anyone in my family needed anything, they were there as soon as possible, with big, embracing arms and wide smiles.”