Butler Newsroom > Butler Home Page > Bobby Fong Remembered for His Many Contributions to Butler
For All the Dogs We’ve Loved Before, A Memorial COB to Hold Information Sessions for Prospective MBA Students

Bobby Fong Remembered for His Many Contributions to Butler

The event began with a video tribute that looked back at his 10 remarkable years at Butler and ended with the crowd singing “Take Me Out to the Ballgame.”

In between, speaker after speaker rose to celebrate the life of Bobby Fong, Butler’s 20th president, who died September 8 in Collegeville, Pennsylvania, where he had been serving as president of Ursinus College for the previous three years. 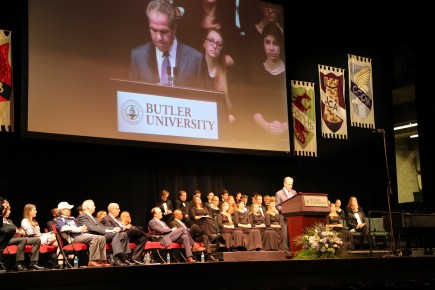 President Danko was among the speakers to honor Bobby Fong.

“The secret to my father’s success is that he loved you,” Fong’s son Colin told an audience that included his mother, Suzanne, September 28 at Clowes Memorial Hall. “He loved you all, just as he loved his own family, and lived to see you succeed.”

The speakers honored Fong’s achievements, which included balanced budgets, construction projects, and setting a warm, gentle tone for the University. They told stories about baseball and Oscar Wilde—Fong loved the New York Yankees and was an Oscar Wilde scholar. They praised his ability to connect with people in every walk of life, and expressed appreciation for the ways he touched their lives. Former Trustee Albert Chen urged the audience to “raise your hands in the air and say, ‘Well done.’ ”

Here are some other comments from the event:

James M. Danko: “His legacy of achievement, after 10 years of service on this campus, was remarkable. From academic excellence to facility improvements to higher levels of community engagement, Bobby Fong successfully led the transformation of Butler University from good to great and from a regional presence to a national one.”

Stephen Briganti ’64, who led the search committee that hired Bobby Fong: “The last candidate of the day was a man named Bobby Fong…. Bobby had a pad in front of him, and he told us what he thought Butler needed—before we had a chance to tell him what we wanted. And remarkably, what he said precisely matched the goals that we would challenge him with: 1. Balance the budget. 2. Raise the academic standards of Butler to higher levels. 3. Raise money. 4. Raise more money. Bobby then proceeded to interview us. And that was it. We had our president.”

Bart Peterson: “Bobby’s stated goals were to lift Butler University academically and financially, to enhance the quality of student life, and to integrate the University into the life of our city. This latter was the first thing that he said to me when he met. He did all of these things, of course.”

Ena Shelley: “When Butler University was approached by (Indianapolis Public Schools) Superintendent Eugene White to develop a partnership with Shortridge Magnet High School, Bobby immediately said yes…. When Butler was presented with the opportunity to open the IPS-Butler Lab School, Bobby once again immediately jumped at the chance…. He believed in my colleagues in the College of Education. He believed in all of us. He believed in me as the Dean. And most importantly, he believed that every child deserves the opportunity to a high-quality education.”

Margaret Brabant: “Waple Cumberbatch works in Butler University’s Building Services. She told me that the year she received Butler University’s Top Dawg Award that she and the other recipients of the award were invited to Bobby and Suzanne’s home for dinner. She said that he took the time to ask her what she wanted to drink and insisted that he be the one to bring her her drink. She said, ‘During dinner he insisted that I sit right next to him—right next to him!—and he talked to me throughout the dinner.’ And with lingering wonderment, she looked at me and said, ‘He treated me like I was someone special.’ Which, of course, she is.”

Todd Bolster ’05: “It’s very rare to meet someone with the innate combination of remarkable intellect and sincere kindness. I think that’s what I’ll remember Bobby for the most. It was as easy for him to talk about Mariano Rivera’s abilities as a closer as it was to passionately debate his views on the transformative power of education. He meant a lot to me as a friend, he meant a lot to me as a student, but I think as much as anything, I will learn and take away his ability to lead from within.”

Warren Morgan ’06: “I remember having a one-on-one with Dr. Fong during my sophomore year at Butler. I shared with him some challenges I was facing and asked him for some advice. After intently listening to my concerns, he gave me some advice that I still follow to this day. He said, ‘Warren, you are a strong leader. Do not allow the challenges to interfere with your destined success. Follow your chosen path, and be the best Warren and leader you can be.’ ”

Laura Michel ’08: “ ‘Personable,’ ‘visible on campus,’ ‘student-centered and ‘forward-thinking’ are all phrases that describe the student perspective of Dr. Fong during his time at Butler University. Dr. Fong truly enhanced the quality of the student experience during his tenure at Butler. Dr. Fong was passionate about listening to student suggestions and ideas and strived to make decisions based on what the students and campus needed.”