On September 22, 1974, Sharon Leininger ’70 and Michael Nemeroff got married in Holcomb Gardens. 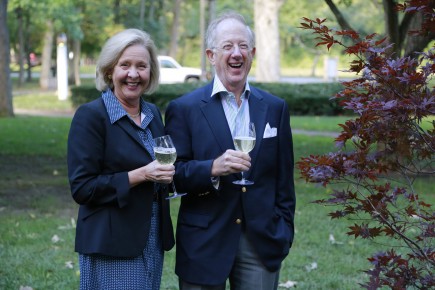 “At first, I was going to make this a surprise,” Mike said, “but everything else we’ve done in our marriage has been a partnership. So about a year ago, I asked her, ‘Would you like to do this?’ She thought about it and decided she would, and we made every decision together along the way—which is the way we do everything.”

The Nemeroffs first met in Indianapolis in 1972 when he was in the Army and she was working in politics. “She didn’t like someone like me at the time,” Mike said.

About a year later, they met again, this time in Washington, D.C. “She liked me better then,” he said.

They got married a year later, with Doug Petersen, Nemeroff’s college roommate and a Presbyterian minister, performing the ceremony. On Monday, Petersen was back, along with his wife, Anne, to help the Nemeroffs celebrate.

The tree planting idea was in the works for a year and a half. Mike Nemeroff contacted Graham Honaker, Senior Development Officer, who made the arrangements, which included a sparkling wine toast and flowers.

The Nemeroffs, who made a gift to Butler in honor of their anniversary, agreed.

“We’ve raised three kids together—she’s done most of the work—our kids are very successful, and we’ve been happy together the whole time,” Mike said. “Based on a sample of one, I think Butler women are pretty terrific.”

“It was special to be married here,” Sharon said. “This is very lovely.”